Buongiorno Trento: Day 2 – Top names square off against the clock

One more day of time trials in Trento, this time with the Elite and U23 races. Ganna goes for another gold, but will have to face Evenepoel, Pogacar, Cavagna and defending champion Küng. Dutch Van Dijk the favorite among Elite Women 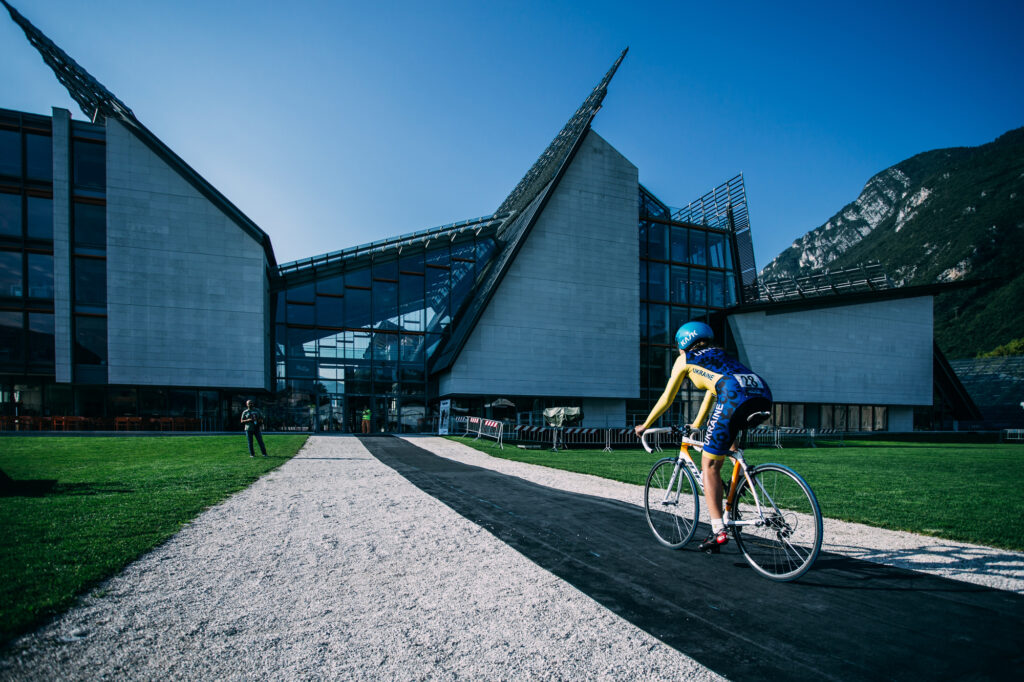 Good morning from the UEC Road European Cycling Championships. A sparkling first day gave Italy its first gold in the Team Relay, whilst Belgian Alec Segaert and Russian Alena Ivanchenko have celebrated successes in the Juniors’ time trials. The program of the greatest continental review in Trentino (8-12 September) goes on with the Men’s and Women’s time trials for the Elite and Under 23 categories.
The first race gets off at 9.15 AM CET: that’s the Under 23 Women’s time trial, followed at 10.45 AM by the Women Elite time trial, the Men Under 23 time trial at 2.15 PM, and the Men Elite time trial at 4 PM (all CET times).

THE COURSE – THE HIGH-SPEED CHALLENGE STARTS FROM THE MUSE

The time trials’ route at the Trentino 2021 European Championships is perfectly suited to specialists in the discipline, capable of pushing long gears and developing high speeds.

Starting from the MUSE-Museo delle Scienze in Trento, and finishing in the near Piazza delle Donne Lavoratrici, the pan-flat 22.4km loop crosses the towns of Romagnano, Matterello and Aldeno, an area rich of high-quality vineyards.

The time trial route passes through the village of Mattarello, located along the ancient road that connected Trento to Rovereto.

Mattarello is close to Trento airport and the Gianni Caproni Aeronautical Museum, which displays the world’s first aeronautical collection, built in the 1920s. It is a unique collection of vintage aircraft, including early twentieth-century aircraft that have made history. These include the Ansaldo SVA 5 that took part in Gabriele D’Annunzio’s demonstration flight over Vienna on 9 August 1918.

The exhibition is named after Gianni Caproni, an aeronautical engineer, entrepreneur and pioneer of flight and founder of the company of the same name engaged in the construction of aircraft in the first half of the 20th century. 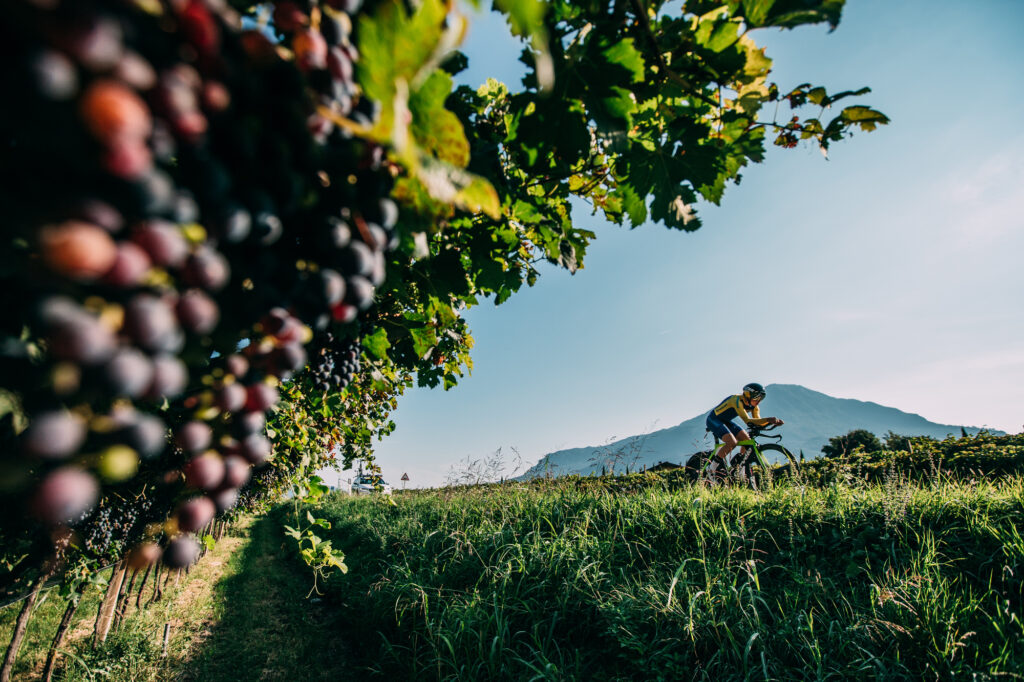 THE PROTAGONISTS – GANNA AIMS FOR SECOND GOLD VERSUS FIERCE RIVALS

After the joy of the Team Relay, the medal ambitions for the Italian National Team are not over. World Champion Filippo Ganna has to be considered the top favorite of the Men’s Elite Time Trial: after showing a solid condition in the team race, he will be trying for a second gold medal at Trentino 2021.

Vittoria Bussi and Elena Cecchini will be at the start of the Women’s Elite race, where the four-time continental champion Ellen Van Dijk (Netherlands) is the clear favorite.
In the U23 Men’s race, wonderboy Juan Ayuso (Spain) will make his debut in the continental event in Trentino, whilst Hannah Ludwig (Germany) had good chances to retain her title among Under 23 Women. 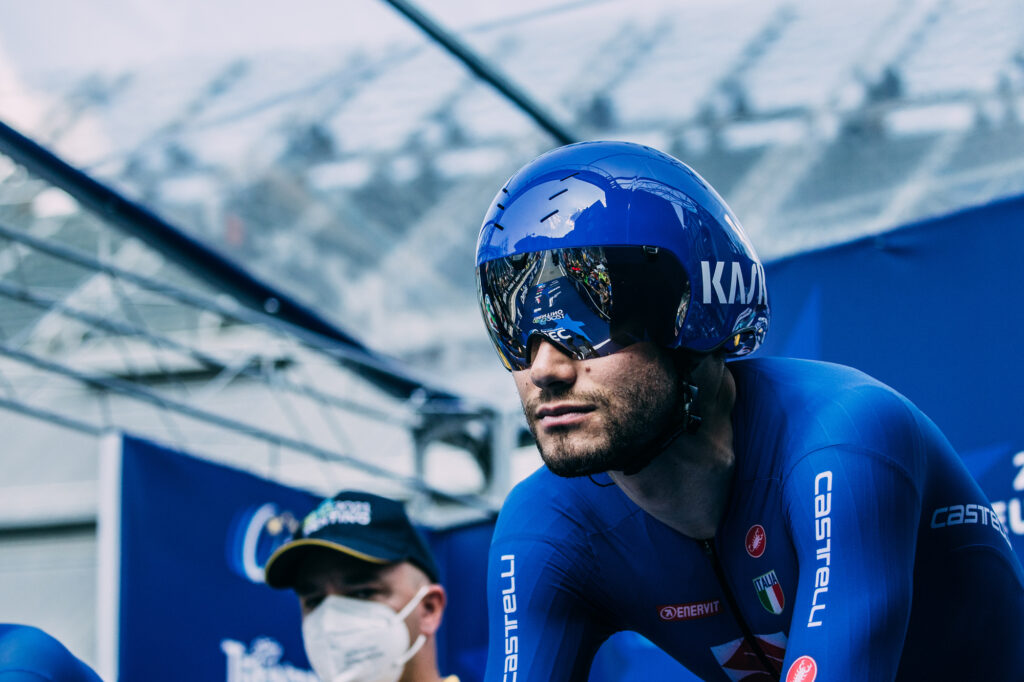 More good news for the riders from the weather side on Thursday 9 September, with sun forecasts and almost no wind. A temperature of 22 degrees is expected in the morning. Temperatures will rise in the early afternoon to 26-27 degrees.

THE EUROPEAN CHAMPIONSHIPS ON TV

At the end of the Elite Women’s and Elite Men’s time trials, the press conference for the top three finishers will be held in the dedicated room at Trento Expo in Via Briamasco, 2. 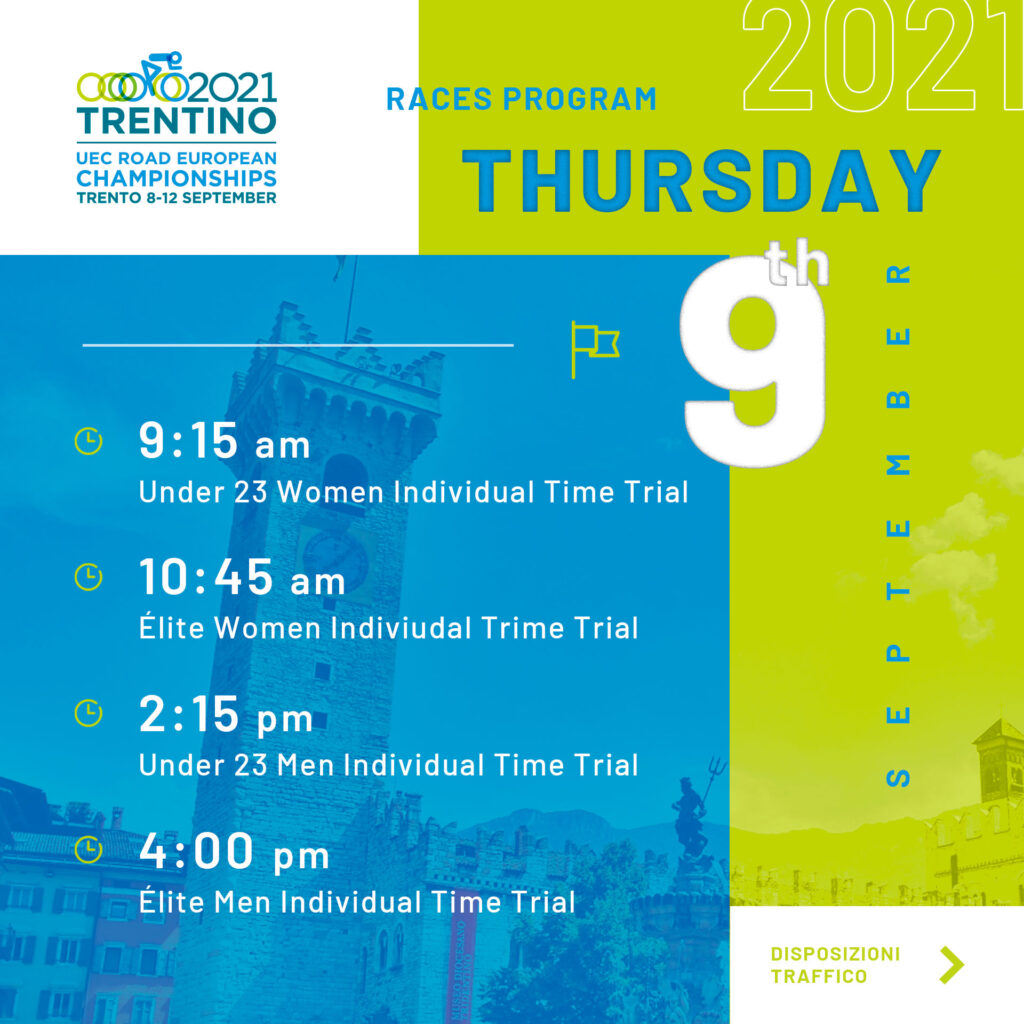 Every day from September 7th to 122th, from 6.00 to 8.00 PM, in Piazza Cesare Battisti in Trento. Meetings and stories about the bicycle together with many guests from the world of cycling and beyond. Anchored by journalist and writer Marco Pastonesi, with actor and musician Massimo Lazzeri.

On Thursday September 9th, at 9.00 pm at the Muse – Museo delle Scienze garden in Trento, the documentary film “Moser: scacco al tempo” dedicated to the great champion from Trentino Francesco Moser will be shown.