Buongiorno Trento: Day 4 - Under 23 Men and Elite Women in the spotlight - Trentino 2021 Cycling

Buongiorno Trento: Day 4 - Under 23 Men and Elite Women in the spotlight

It’s the penultimate day of racing at the Road European Championships in Trentino (8-12 September). On Saturday, September 11th it is the turn of the U23 Men and the Elite Women races. “The European Night” will be ending the day in downtown Trento.

Good morning from the Road European Championships. Yesterday, Friday September 10th, ended with another victory for the Italian colors: the gold medal of Silvia Zanardi in the U23 Women race. The Junior jerseys went to Germany, with Linda Riedmann, and France, with Romain Gregoire.

The first day of road race has revealed a tactic pattern: the Povo climb is the ideal springboard to make a difference in the finale, selecting a reduced group that eventually ends up contesting the gold in a sprint on the Via Belenzani finishing straight, staring the Trento Piazza Duomo in the eyes. Let’ s see if such script gets confirmed also on Saturday, September 11th, with the Under 23 Men race in the morning, starting at 9.00 CET, and the Elite Women’s race in the afternoon, starting at 14.15 CET. 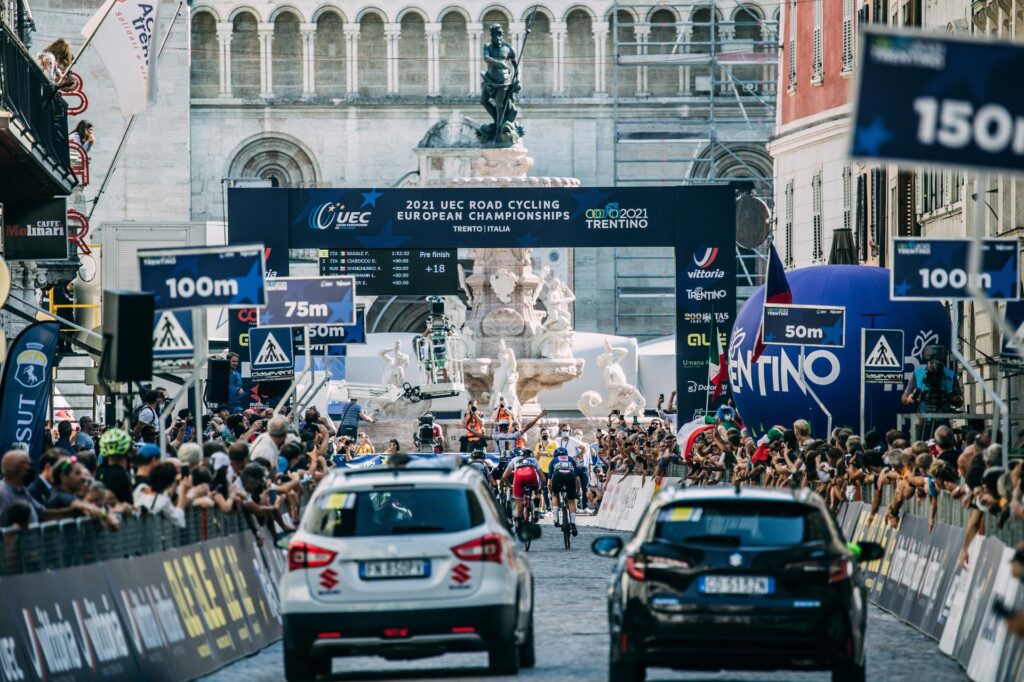 THE ROUTE – THE POVO CLIMB THREATENS THE FAST MEN’S HOPES

All the road races take place entirely in the city circuit of Trento, 13.2 km and 250 metres in elevation gain, starting and finishing in Piazza Duomo and characterized by the Povo climb.

The first 2 km are flat. From Via San Marco, the uphill section towards the Povo roundabout begins (3.6 km at 4.7%) and could wear down the legs of the riders as the laps go by. The following descent brings the athlets to Piazza Vicenza, where the last 4 flat kilometres begin, leading through the streets of the city centre to the finish line in Piazza Duomo.

The eastern side of Piazza Duomo is the starting and finishing point of all road races. The square is dominated by the first bishop’s residence, later called Palazzo Pretorio, and the Torre di Piazza, known as the Civic Tower because it is the symbol of municipal authority. The tower stands on the remains of the Roman gate that opened onto the Via Claudia Augusta. It was built in the 11th century.

The final part of the circuit overlooks Via Belenzani, one of Trento’s most picturesque streets with the frescoes and Renaissance palaces that line it. During the Council of Trent (1543-1565), the palaces on the street were the homes of several cardinals and presidents of the Council Assembly.

The successes of the European Champions have the taste and elegant scent of the mountain sparkling wine par excellence: Trentodoc.

The history of Trentino and Trentodoc oenology is closely related to some fundamental elements of Trentino viticulture. The Trentodoc was created from the intuition and courage of Giulio Ferrari, a young student at the Imperial Royal Agricultural School of San Michele, which later became the Agricultural Institute of San Michele all’Adige and, from 2008, the Mach Foundation. It was there that Giulio studied to become an oenologist and, returning from one of his many trips to France, he decided to start his production of his classic method. Since then, many have followed his steps, and in 1993 he obtained the DOC Trento, the first Italian DOC for classic method sparkling wine.

Today in Trentino, 57 wineries produce Trentodoc, and riding through Trentino it is easy to come across vineyards of Chardonnay and Pinot Noir, the fundamental grapes for the production of sparkling wine. The Trentodoc disciplinary imposes 4 types of grapes:  Chardonnay, Pinot Nero, Pinot Bianco and Menieur.

The harvest is done manually, and the base wine ages slowly in the bottle for at least 15 months (36 for the Reserves), up to over 10 years on the lees for the more advanced Trentodocs. 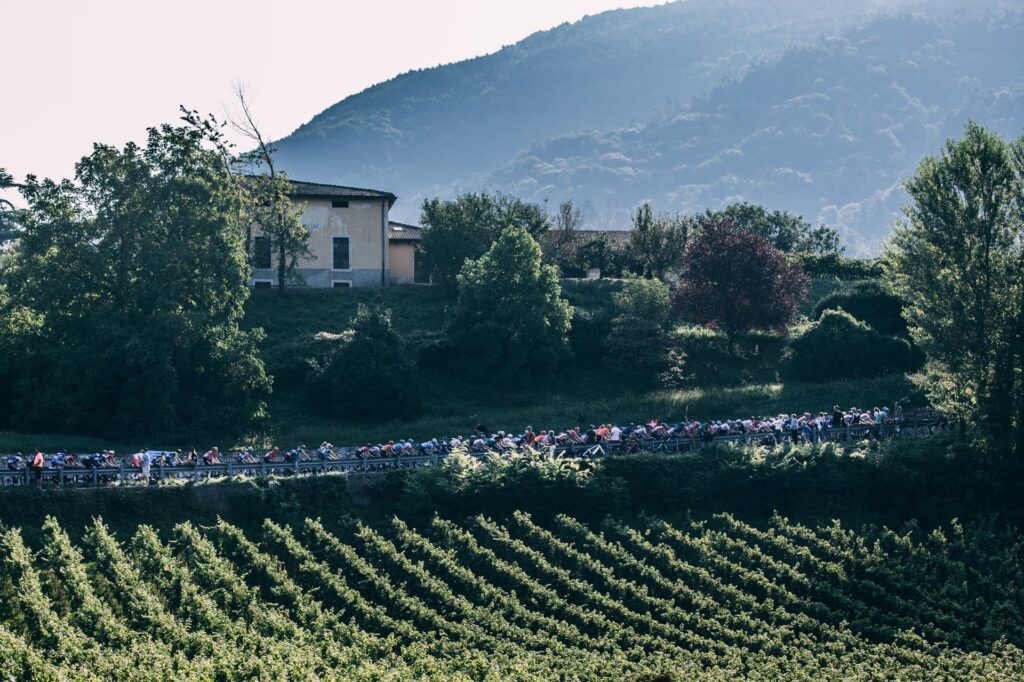 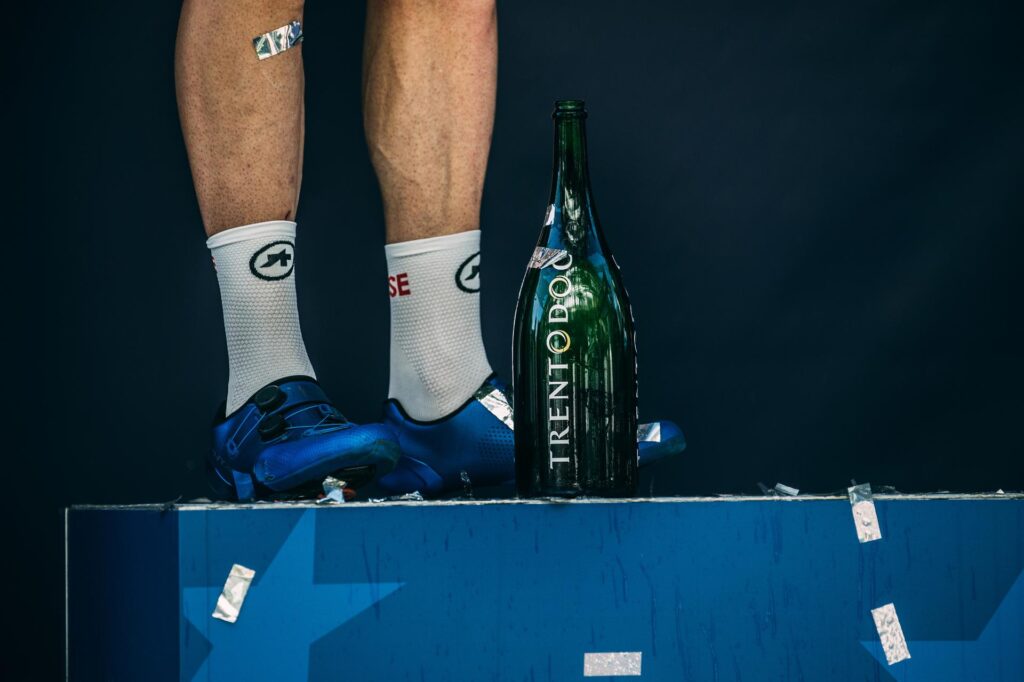 THE PROTAGONISTS – AYUSO FAVORITE AMONG THE UNDER 23. LONGO BORGHINI CHALLENGES THE NETHERLANDS

The under-23 men’s race promises uncertainty, and as Friday’s races have already shown, the Trento circuit is not tactically simple.

Forced to retire due to a crash three weeks ago at the Tour de l’Avenir, Spaniard Juan Ayuso hopes to rebound at the Road European Champs in Trento, at the end of a season in which he often showed a blatant supremacy.

Other national teams are not lacking in talent as well: Henri Vandenabeele’s Belgium, the Norway of Avenir winner Anders Halland Johannessen, and also Italy with Filippo Zana and Luca Colnaghi.

Beating the Dutch team is the mantra for every other rider in the Elite Women’s event. The orange selection lines up a dream team, with defending champion Annemiek van Vleuten, Marianne Vos, Amy Pieters, Chantal Blaak, Ellen Van Dijk and Demi Vollering.

Elisa Longo Borghini, bronze medallist in Tokyo, is the leader of a strong Italian team that mixes the young talent of Marta Cavalli and Elisa Balsamo and experienced riders lke Tatiana Guderzo.

The President of the International Cycling Union, David Lappartient, is among those who who will enjoy the show of the last two days of competition in the heart of Trento.

The head of the World federation of cycling arrives in Trentino on Saturday morning, and will take part in a press conference at the headquarters of the European Championships at Trento Fiere.

The Road European Championships in Trentino continue their happy spell with weather. Light winds will characterize the whole day, while the temperatures will oscillate from 21 degrees in the morning to 27 in the afternoon in a clear sunny day.

Every day from 7 to 12 September, from 18.00 to 20.00, in Piazza Cesare Battisti in Trento. Meetings and stories about the bicycle together with many guests from the world of cycling and beyond. Conducted by journalist and writer Marco Pastonesi with actor and musician Massimo Lazzeri. Tonight’s guests include Cordiano Dagnoni, President of the Italian Cycling Federation, Maurizio Rossini, CEO of Trentino Marketing, Alessandra Cappellotto, former athlete and President of the Road to Equality Association, journalist Davide Marta and Andrea Satta, musician and writer.

On Saturday 11 September, at 20.30 at Doss Trento, a concert is scheduled in collaboration with the Sosat Choir to celebrate the 100th anniversary of the Trento Alpine Section.

THE NIGHT OF THE EUROPEANS

From 11 to 12 September, from 1 p.m. to 5 p.m. in Piazza Duomo, humorous drawing sessions dedicated to cycling and sustainable mobility will be held by Studio d’Arte Andromeda. 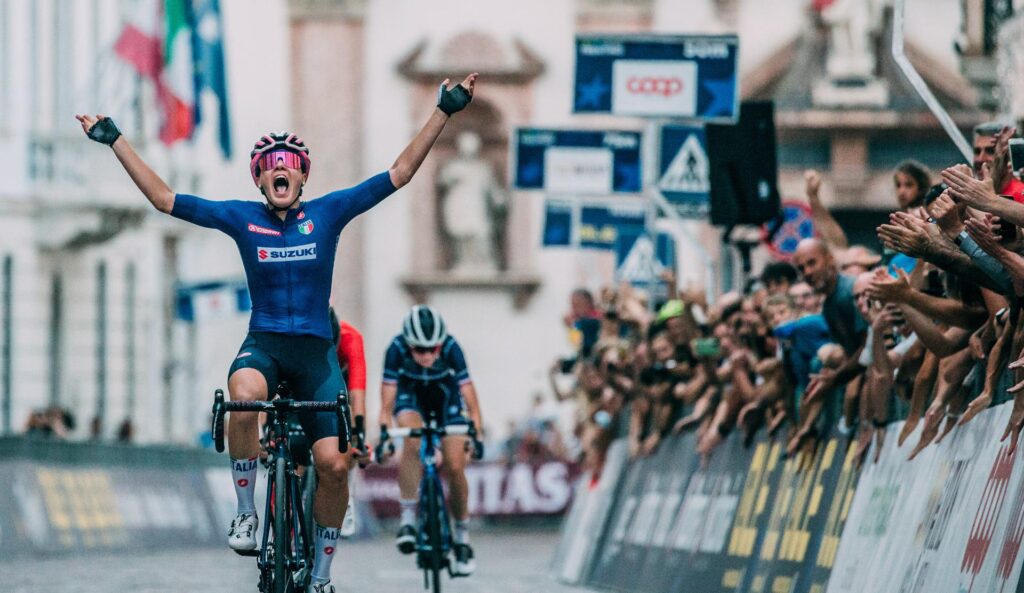