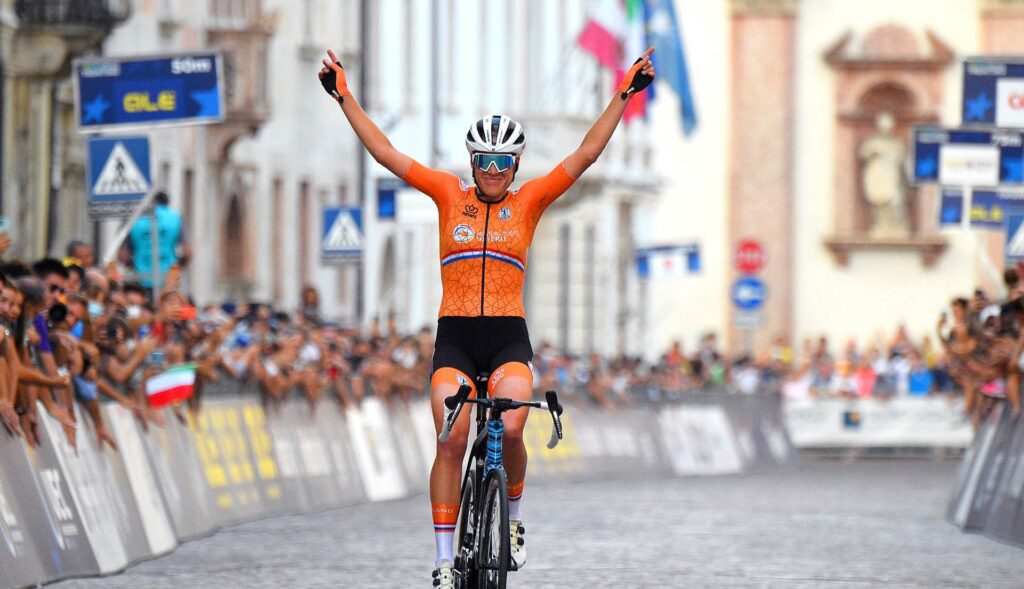 The Netherlands lived up to the odds and expectations by claiming the Women’s Elite Road Race title in Trento at the UEC Road European Championships – Trentino 2021; they just did it in a different way than most would have expected.

The Orange team won the fifth Women’s RR title in six editions of the continental event, confirming a supremacy that has lasted for years, only interrupted by the unexpected victory of Austrian Kiesenhofer at the Tokyo Olympics.

After winning four European time trial titles, Ellen Van Dijk showed up to the appointment with her opportunity in the road race, delivering with a great long-range action. Behind her on the podium were Germany’s Liane Lippert and Lithuania’s Rasa Leleivyte.

Earlier on the day, Thibaut Nys had left a huge impression by claiming the gold medal for Belgium in the Under 23 Men’s race. The son of the great Sven made the most of one of his few road races in the season, delivering a dominating sprint ahead of Italy’s Filippo Baroncini and Spain’s Juan Ayuso.

Once again, Trentino and the city of Trento triumphed, whose splendid images went around the world, and whose amazing show of public impressed even David Lappartient, the UCI President who arrived in Trento today to experience the last, exciting days of the event. 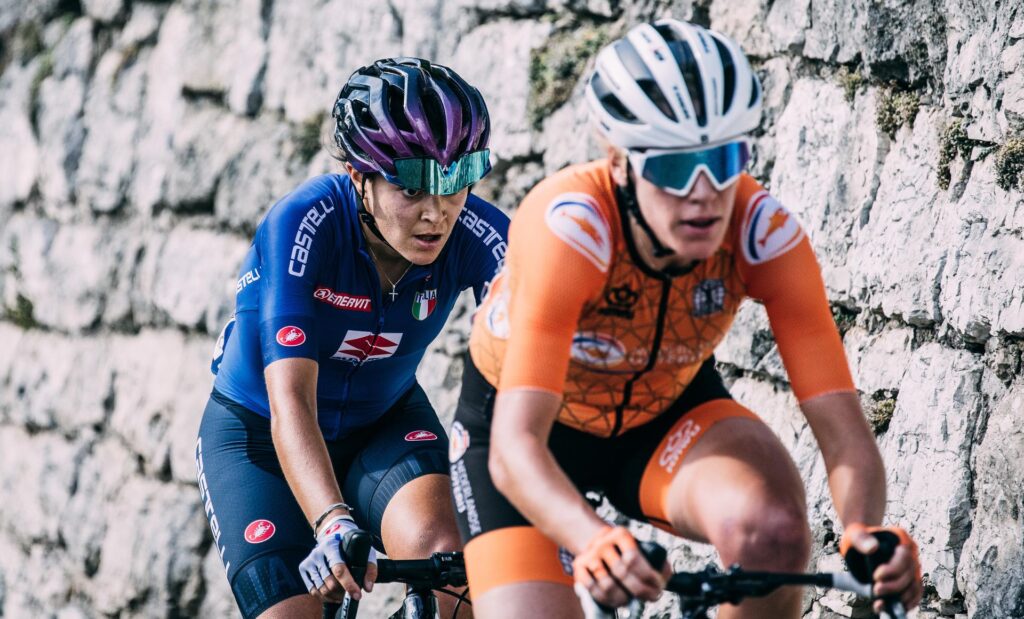 It took more than half of the total 107.2 km (eight laps of the circuit) for the Women’s Elite road race to find its turning point. Ellen Van Dijk went on the attack, bringing with her Italian Soraya Paladin, German Romy Kasper and French Aude Biannic.

As the laps passed, the pace of Van Dijk exhausted the opponents who inexorably faded: first Biannic, then Kasper, and finally also a combative Soraya Paladin raised the white flag in the penultimate time on the Povo climb. Back in the peloton, Belgium and Germany tried to organize the chase, the latter setting up the attack of Lippert. The German’s acceleration generated a group with Italy’s Longo Borghini and Cavalli, Pole Niewiadoma, Swiss Reusser – the European TT champion, – Lithuanian Leleivyte, Belarusian Amialiusik and two fellow Dutch riders, Van Vleuten and Vollering.

The chasing group managed to come within second, but struggled to find an agreement and Van Dijk took advantage of it on the descent, opening a one minute gap.

On the last Povo ascent, Lippert and Niewiadoma tried to increase the pace again, but gold was already gone. The German confirmed to be the strongest of the chasing group by winning silver in the sprint; bronze for surprising Lithuanian Leleivyte ahead of the Pole Niewiadoma and fellow Dutch Vollering.

The party, however, was for Ellen Van Dijk, who after four European time trial titles wore the road race European champion’s jersey for the very first time. “I didn’t expect it, my role was to support my teammates, but I felt good and I wanted to go on the breakaway. Little by little I managed to outpace all the others, also because it was my only way to try and win, not being the best sprinter. In the finale, I didn’t know the chasers had come that close, and maybe it was better this way .. “ 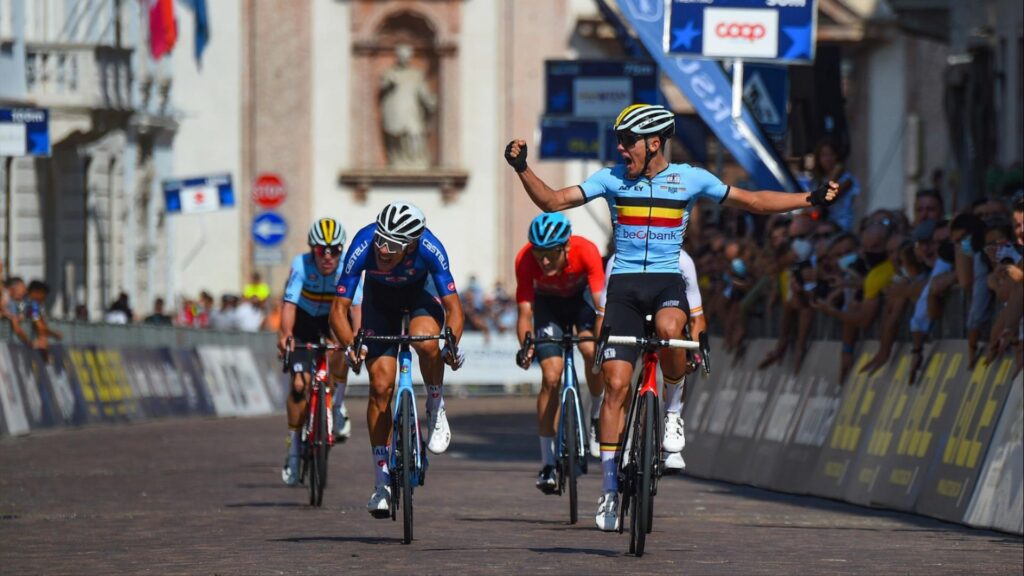 TALENT HAS NO DISCIPLINE: THIBAUT NYS HAS NO LIMITS

The Belgian, already Junior European cyclo-cross champion in Italy in Silvelle di Trebaseleghe in 2019, was part of the decisive action on the last time atop the Povo ascent, when Ayuso attacked in the successful attempt to bridge back to Belgian Lennert Van Eetvelt, who had gone on the attack in the previous lap.

With him, in addition to Baroncini and Nys, were other Italian Filippo Zana, Hungarian Erik Fetter and Frenchman Louis Barre. The seven-man group retained an advantage of 10-15 seconds over the chasing group and, an unsuccessful acceleration by Zana with 2km to go, they sprinted for victory.

Baroncini went into the final straight in the first position but Nys soon got out of his wheel and showed his power.

“It feels strange to win this road title on the day the cyclo-cross season opens in Belgium,” Nys said. “I had raced very little on the road this season, but this European Championships was a big goal for me, and to have achieved it is incredible. By a whisker, I managed to stay in the decisive action, and from there I was convinced I could be the fastest on the final straight.”

The victory of Nys, considered one of the most promising talents of world cycling, confirms the current trends of raising prospect competing – and shining – in different disciplines. The Belgian has cyclo-cross as his first love, and he was 2020 Junior World Champion in the discipline. 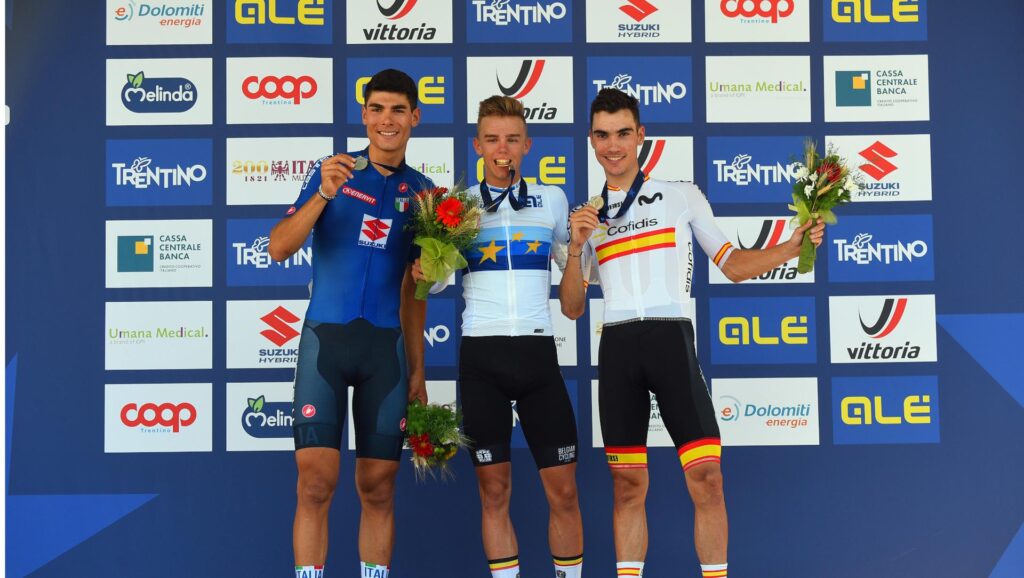 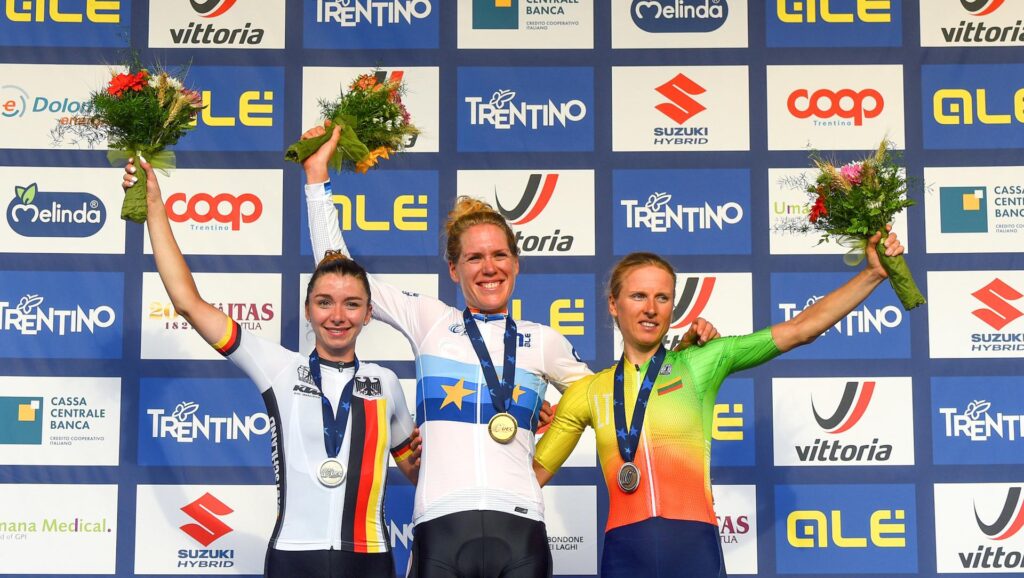 TOMORROW THE GRAND FINALE: EVENEPOEL AND POGACAR IN THE SPOTLIGHTS, ITALY HOPES IN COLBRELLI

The Road European Championships in Trentino will end tomorrow, Sunday September 12th, with the Men’s Elite race. Italy has won the last three edition, and has Sonny Colbrelli as its best option – at least on cards – to try to extend the stretch.

In what should be an unpredictable race, with the in-line stretch of 69 km through the Valle dei Laghi and the Monte Bondone ascent to Candriai, before the 8 laps on the final circuit (179,2 km), the list of top favorites includes two-time Tour de France winner Young Pogacar (Slovenia), Marc Hirschi (Switzerland), Joao Almeida (Portugal), Remco Evenepoel (Belgium) Romain Bardet (France), Bauke Mollema (Netherlands) and Mikel Landa (Spain). 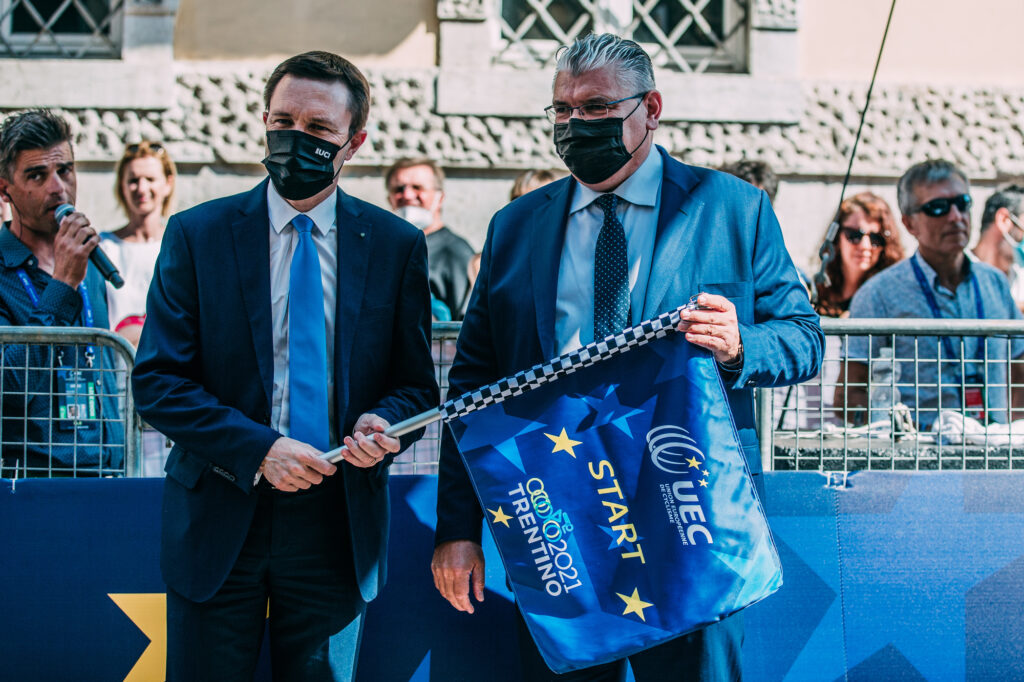