Stefan Küng and Marlen Reusser are the Elite Time Trial World Champions at the UEC Road European Championships Trentino 2021. Ganna and Evenepoel round out top-class Men’s podium. Denmark’s Pejtersen and Italy’s Guazzini the fastest among Under 23. On Friday the road races begin

The Italian fans had hoped for another golden day for Filippo Ganna, but the second day of the UEC Road European Championships – Trentino 2021 deservedly crowned Stefan Küng as ITT European Champion once again, as the Swiss defended the title conquered last year in Plouay. Anyway, it was undoubtedly a show of public and enthusiasm in the Le Albere quartier, where many enthusiastic people held their breath for the home favorite until the final meters of the 22,4 km test, on Thursday September 9th.

Belgian Remco Evenepoel rounded out a regal podium, showing he is back to his best after the horrific crash of the 2020 Il Lombardia: rivals would better watch out for him in Sunday’s Road race.

Thursday was clearly a happy day for Switzerland, that swept the Elite ITT titles: before Küng’s success, had worn the European Champion’s jersey after the Elite Women’s race.

If Italy had to settle for the silver with its most awaited champion – who met in Trento another Olympic Gold medalist, Trentino’s sailor Ruggiero Tita – the home fans still had the opportunity to celebrate another gold medal after the Team Relay.

The Under 23 Men’s race crowned Dane Johan Price Pejtersen, who returned to the top of Europe two years after Alkmaar 2019: between the two titles, a heart arrhythmia that had put his career on hold. His tears at the finish, clearly showed the emotion of closing such circle. 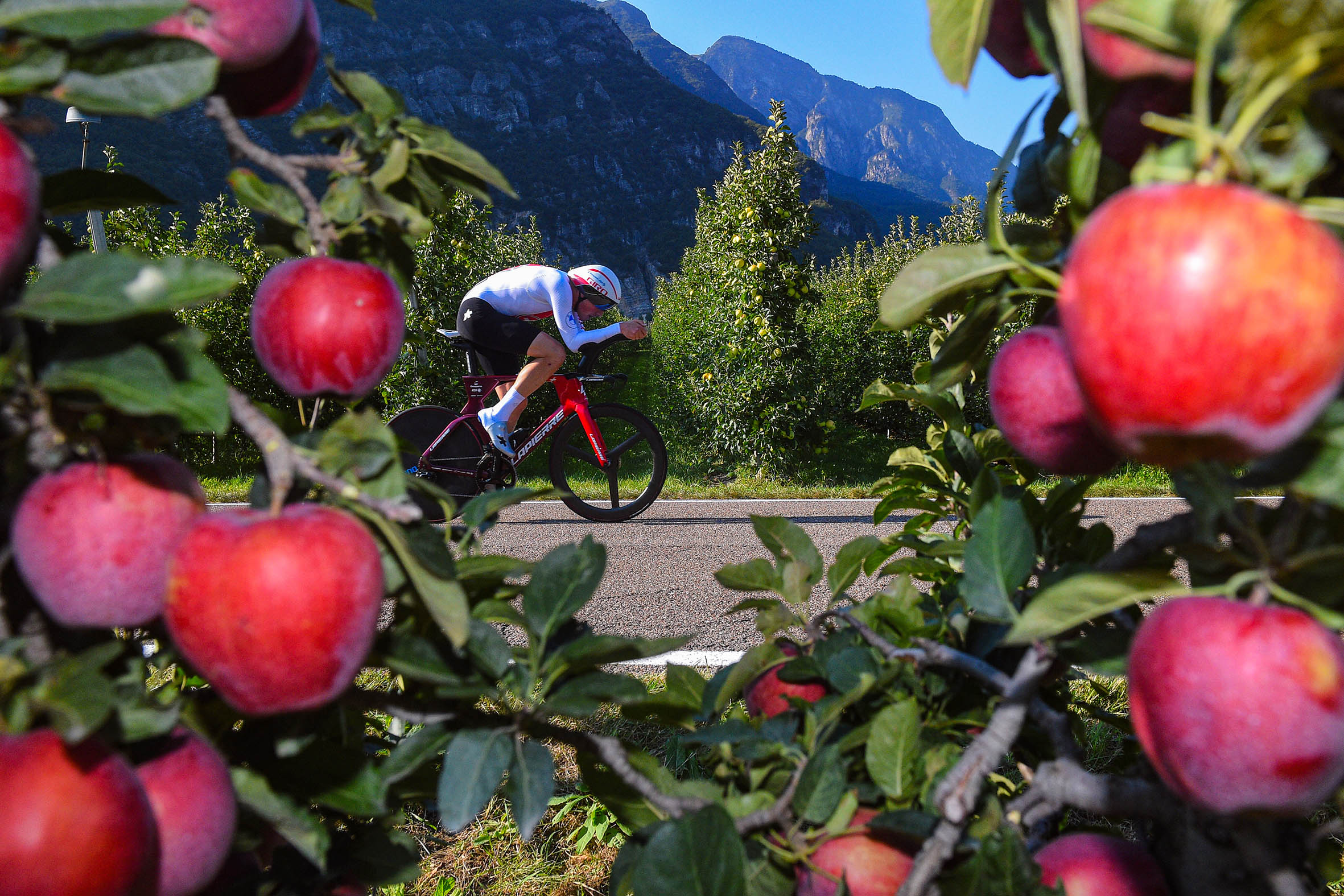 THE SWISS TRAIN ON TIME IN TRENTO

Though he was the defending champion, Stefan Küng’s name was often behind others in the odds for Trento’s European Championships: from Ganna to Evenepoel, from Tadej Pogačar to his compatriot Bisseger. However, the 27-year-old Swiss spoke with facts, delivering a perfect time trial for power and tactics over the 22,4 km around Trento: 24:29:85 was his time, at an average of 54,86 km/h.

“Halfway through the race I was just behind Ganna, but I didn’t lose confidence. I knew I was feeling good, even if I didn’t go too well in the Benelux, and at the Olympics I was at the foot of the podium. This season I have often come close to the great results, and I have always found someone stronger. This time, my day has arrived: there’s nothing better on the way to the World Championships,”commented the Trento 2021 Champion.

After the first 11 km, Ganna had gone through the intermediate one second ahead of Küng and three over a solid Remco Evenepoel, but it was in the second half that the Swiss made the difference. Seven seconds ahead of Ganna at the finishing line in Piazza delle Donne Lavoratrici, even 14 on the Belgian talent: an indisputable success.

Stefan Bisseger (Switzerland) settled for fourth after being in the lead for long, fifth place for Max Walsheid of Germany whilst Italy placed another man in sixth position, Edoardo Affini. Tadej Pogacar (Slovenia) finished twelfth in a race suited for specialists, at 1:21 from Küng.

The tight challenge between Küng, Ganna and Evenepoel thrilled the many fans who took to the roads of Trentino to enjoy a great show, as did the many spectators through live TV in Europe and Asia. 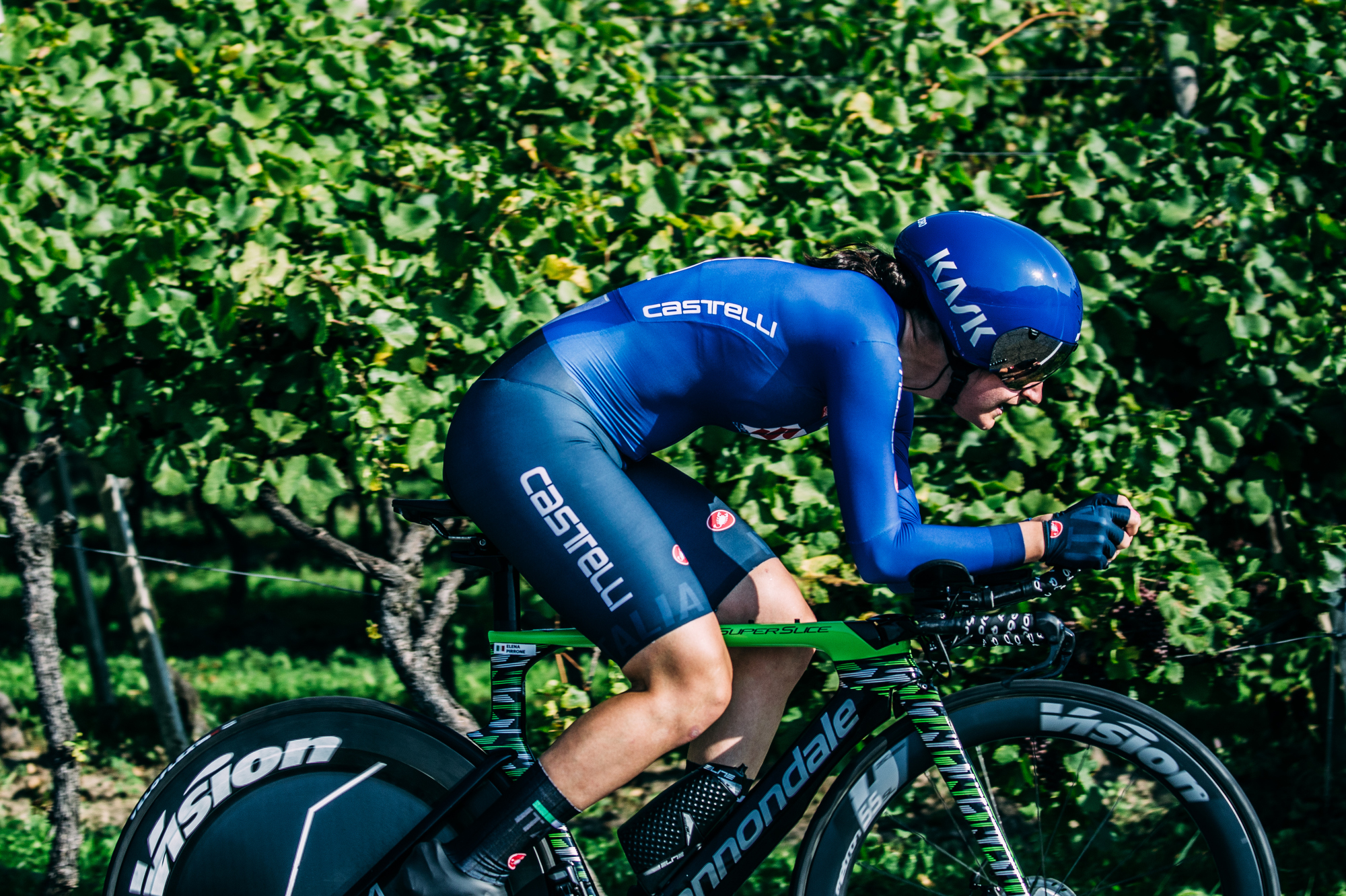 THE JOY OF MARLEN REUSSER

Swiss Marlen Reusser was the clear winner of the Elite Women Individual Time Trial, proving unbeatable on the 22.4 km of the Trento circuit.

The Swiss finished with a 27:12:95 time, unattainable even for Ellen Van Dijk, European Champion of the category for four times in the last five years. The Swiss, bronze medalist, in the last edition pushed hard right from the start in front of the MUSE – Museum of Sciences, proving out of reach for the rivals already after the first intermediate. Only Van Dijk tried to resist the force of the Swiss, but the gap recorded at the split further widened in the final part, until the final 19-second distance.

German Lisa Brennauer completed the podium, in spite of being overtaken by Reusser in the last meters: her delay on the finish line was over a minute.

“I’m exhausted but super happy, and if you’re not exhausted at the finish line means you didn’t do enough,” Reusser said afterwards. “I knew I had good legs, but you never know, Ellen and Lisa as well were also going strong. Now I will focus on the Road Race with the Swiss Team, which I love to race with.” 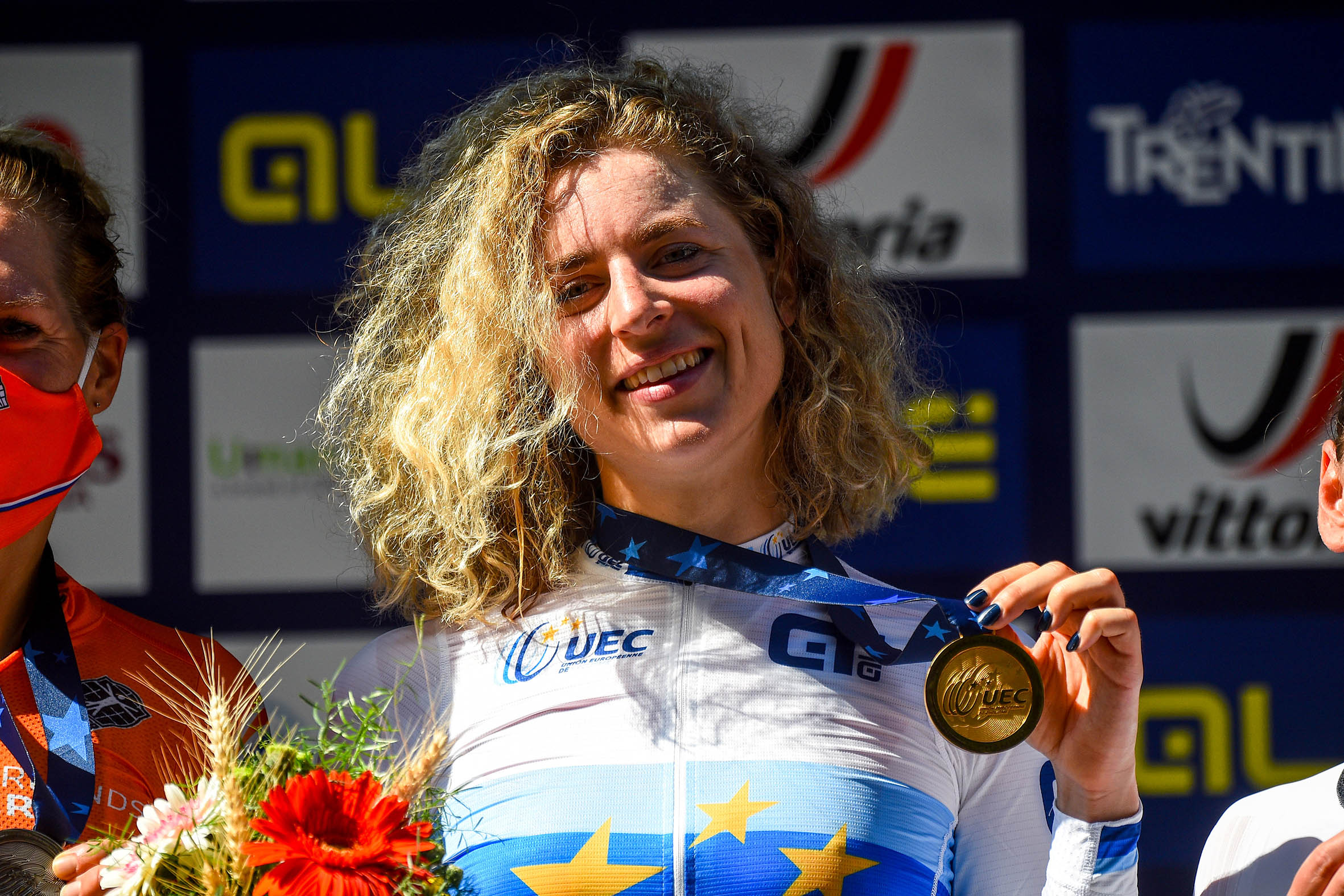 ITALY TAKES GOLD AMONG UNDER 23 WOMEN

Vittoria Guazzini gave Italy the second gold medal of this UEC Road European Championships. Already European TT Champion in 2017 among Juniors, and plenty of times on the track, the Italian clocked a 29:02:08 time, displaying her strength from the very beginning. Behind her, German Hannah Ludwig had to give up the throne after two years, crossing the line 38 seconds behind.

“I am very happy, winning at home is special” – Guazzini said at the finish line, – “I hardly felt the fatigue. The European time trial was an important goal of the season, and I am happy to have been able to reach it. I managed myself well, and I am particularly happy with how I interpreted the race. The route was suitable for me, I pushed from start to finish and it went well”.

The Italian party was completed by Elena Pirrone, third 45 seconds behind her compatriot. After passing in fourth position at the split time, the athlete from Bolzano recovered in the second part of the race, earning the bronze medal.

THE COMEBACK OF JOHAN PRICE PEJTERSEN

After seeing his 2020 season compromised due to an arrhythmia, and having defeated Covid-19, the Danish athlete has returned to his best, setting an irresistible pace for all opponents.

Værenskjold and Hoole just managed to beat German Michel Heßmann in the race for the podium.”

“Winning here means a lot to me, after what I have been through,” said the Dane, in tears. “I knew I was among the favourites, but I really didn’t know what I could aim for today. It feels great to be wearing this jersey again.” 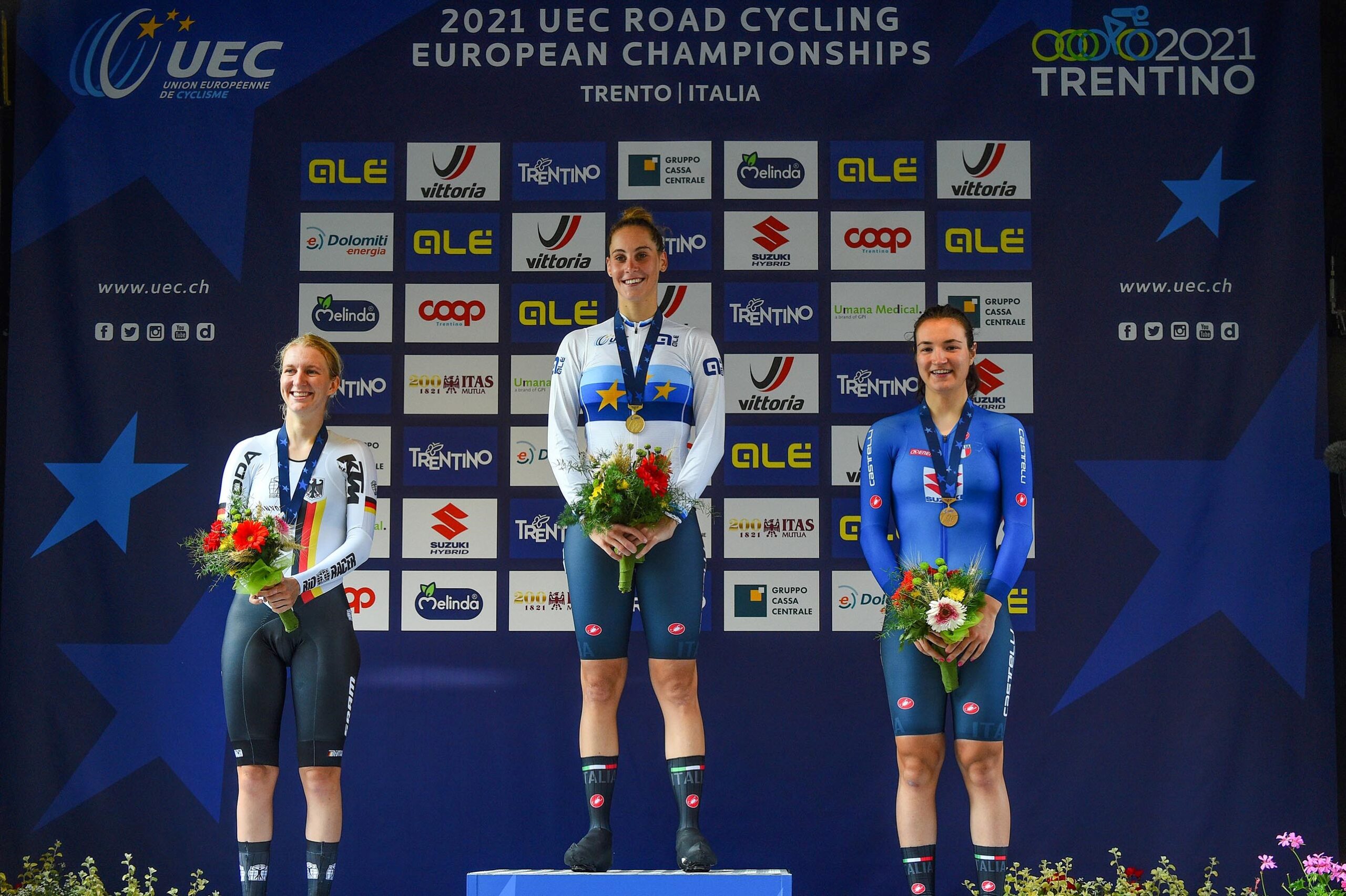 The first event on the day will be the Junior Men Road Race at 9:00 am CET, on a 107.2km course, eight times on the 13,2 km city loop in Trento featuring the Povo climb.

Belgians Alec Segaert and Cian Uijtderbroecks are motivated to repeat themselves after the TT one-two, and will be facing Frenchmen Brieuc Rolland and Lenny Martinez, Norwegian Per Strand Hargenes, and the Swiss son of art Nils Aebersold, bronze at the MTB World Championships in Val di Sole just a few days ago.

In the Junior Women’s Road Race (start at 1:30 pm CET), Swiss Noelle Reutschi will try to make up for an underwhelming time trial, while Alena Ivanchenko should not be underestimated after her impressive TT display. The winner of the Piccolo Trofeo Binda, Anniina Ahtosalo (Finland) is another favourite on the 67.6 km (5 laps of the city circuit) route in Trento.

The Under 23 Women road race will close the day, starting at 4:30 pm CET. Italy will try to defend the title won last year by Elisa Balsamo, relying on a very competitive line-up with new European Time Trial Champion Vittoria Guazzini, Silvia Zanardi and Gaia Realini. Eyes will also be on the Austrian selection, with Tyroleans Mona Mitterwallner and Laura Stigger, respectively U23 Cross Country MTB World Champion in Val di Sole in 2021 and Junior Road World Champion in 2018 in Innsbruck. The Netherlands are also expected to feature in the medal chase, with Shirin Van Anrooij as the top name in the list.