A number of top names will be at the start of the Road European Championships, kicking off in Trento in less than a week (September 8th-12th), Trentino is ready to welcome over a thousand athletes from 39 countries. 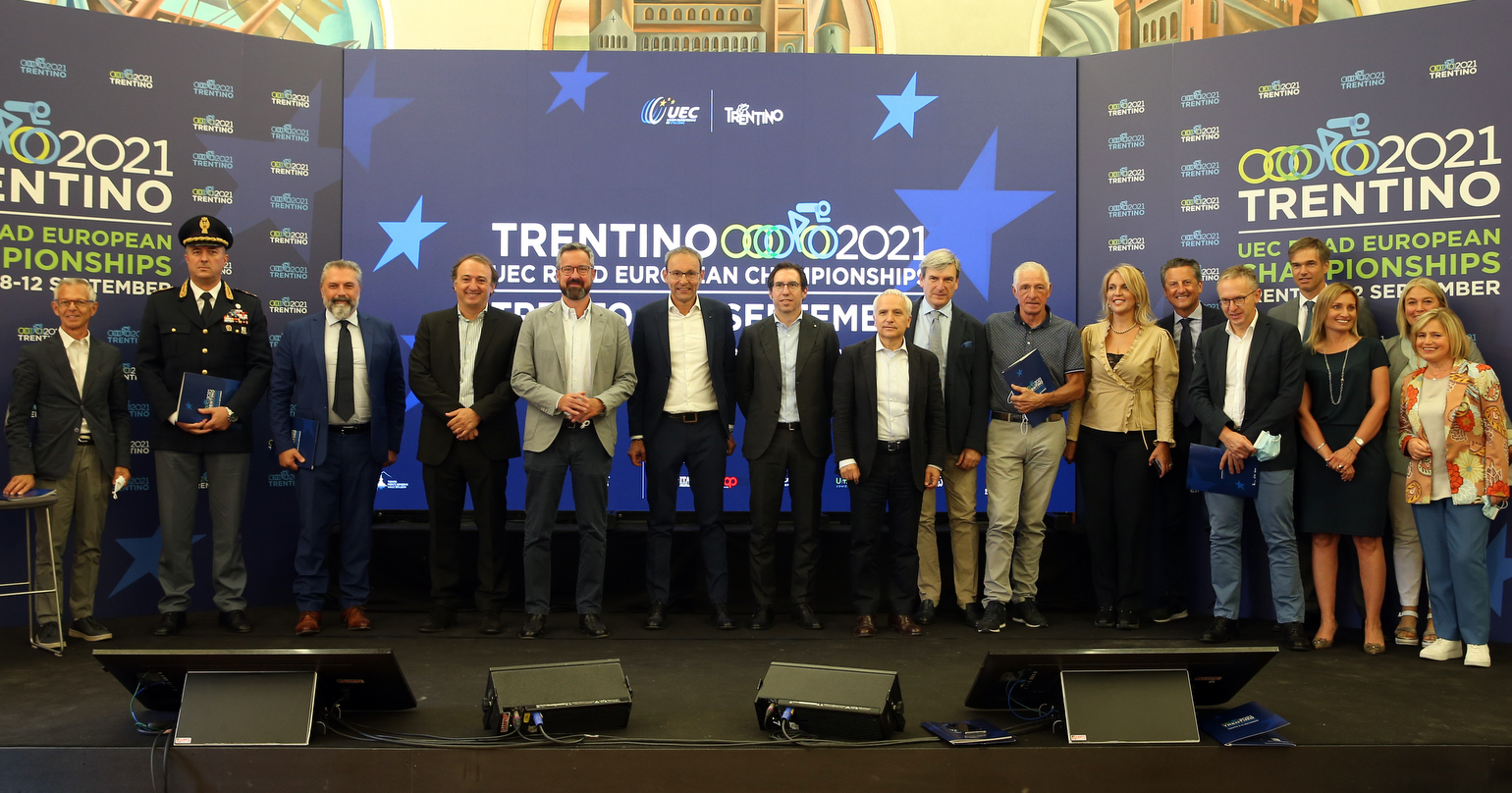 Trento is ready for the most important week of its sporting season. Trentino is looking forward to another great cycling event just few days after the impressive success of the Mountain Bike UCI World Championships in Val di Sole.

In less than a week, the first races of the UEC Road European Championships 2021 (September 8th-12th) will get underway. The programme will open on Wednesday September 8th, with the time trials for junior and under 23 categories and the Team Relay, followed by the élite time trials on Thursday, and all road races from Friday, September 10th.

The entry-list for the UEC Road European Championships – Trentino 2021 is packed with cycling stars, more than ever before in the event’s history.

With 1042 registered riders representing 39 nations (a number that could grow further in the coming hours), from September 8th to 12th, 13 titles will be awarded between Trento, Monte Bondone and Valle dei Laghi in the Elite, Under 23 and Juniors categories (including time trials and road races), as well as the Team Relay event. 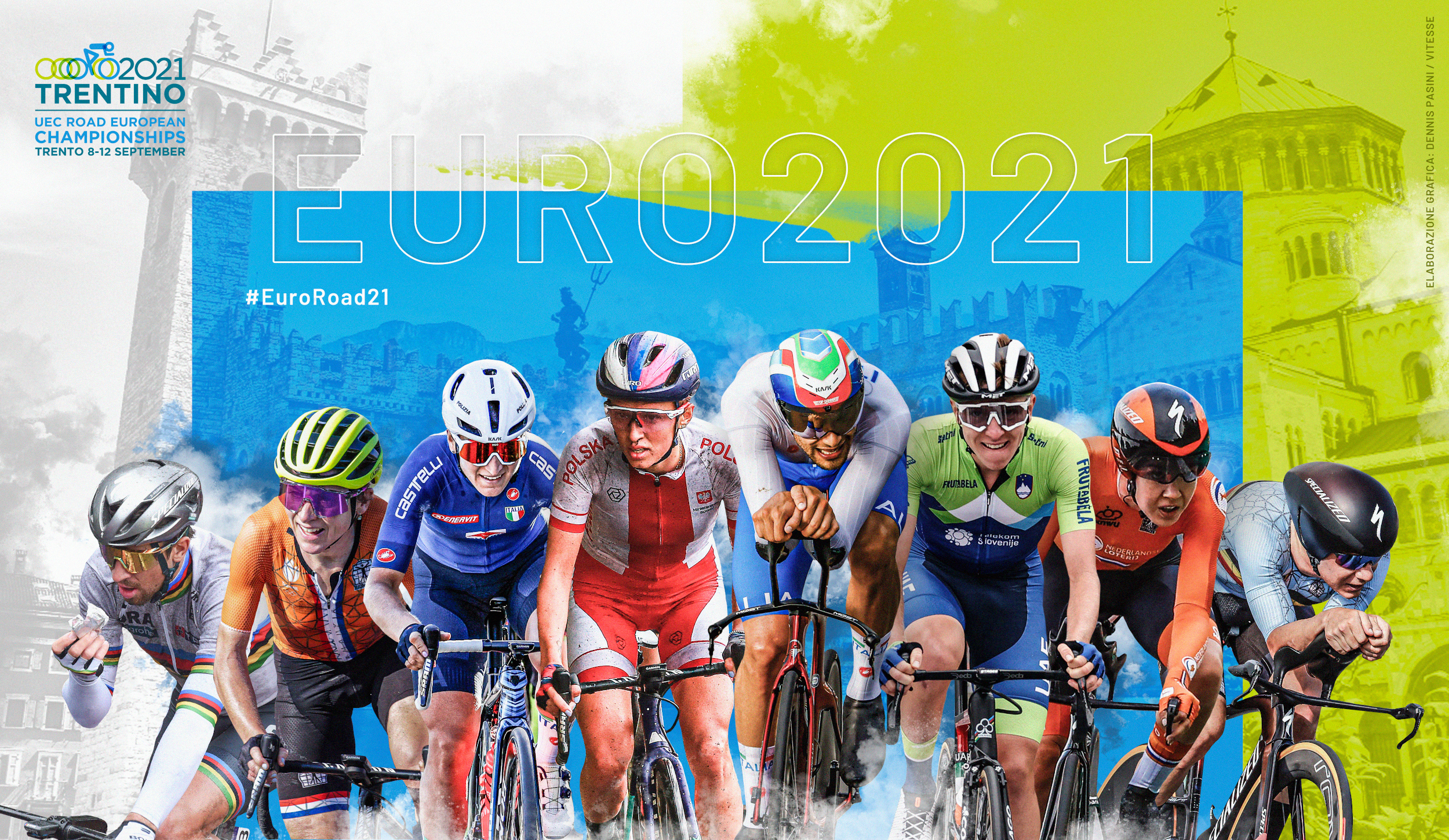 ELITE MEN, THE CLASH OF THE YOUNG SENSATIONS

On Sunday, September 12th, 2021, the Elite Men’s category will be called to close the program on a high, with a 179,2 km challenge starting from Trento and crossing the Valle dei Laghi, climbing on Monte Bondone from the Candriai slope before the final 13,2 km city circuit with the Povo climb, to be repeated eight times.

Top riders such as the winner of the last two Tour de France, Tadej Pogacar, Tokyo 2020 time trial winner Primoz Roglic and talented Belgian Remco Evenepoel will have a chance to shake things off from distance. The elevation profile of the final circuit is not overly demanding, giving the edge – at least on cards – to strong all-rounders with a fast finish like three-time World Champion Peter Sagan, 2021 Ronde van Vlaanderen winner Kasper Asgreen, Slovenian Matej Mohoric, Norwegians Edvald Boasson-Hagen and Alexander Kristoff and Italians Sonny Colbrelli and Matteo Trentin.

Possible outsiders who could use the Povo climb as a springboard are Dutchman Bauke Mollena, Pole Rafal Majka, the French duo of Romain Bardet and Warren Barguil, 2013 World Champion Alberto Rui Costa, the Spanish duo of Mikel Landa and Luis Leon Sanchez and Belgian Philippe Gilbert.

On Thursday, September 9th, 2021, the time trial will pose a rematch of the Tokyo 2020 challenge. Olympic Champion Primoz Roglic, reigning World Champion Filippo Ganna and the two new-generation phenomena Tadej Pogacar and Remco Evenepoel, will be at the start of the 22,4 km time trial.

THE NETHERLANDS START AS FAVORITES IN WOMEN’S RANKS

With the continuous growth of women’s cycling, on Saturday, September 11th, 2021, Elite Women are expected to provide an entertaining show in the road race over eight laps of the city circuit, for a total distance of 107,2 km. 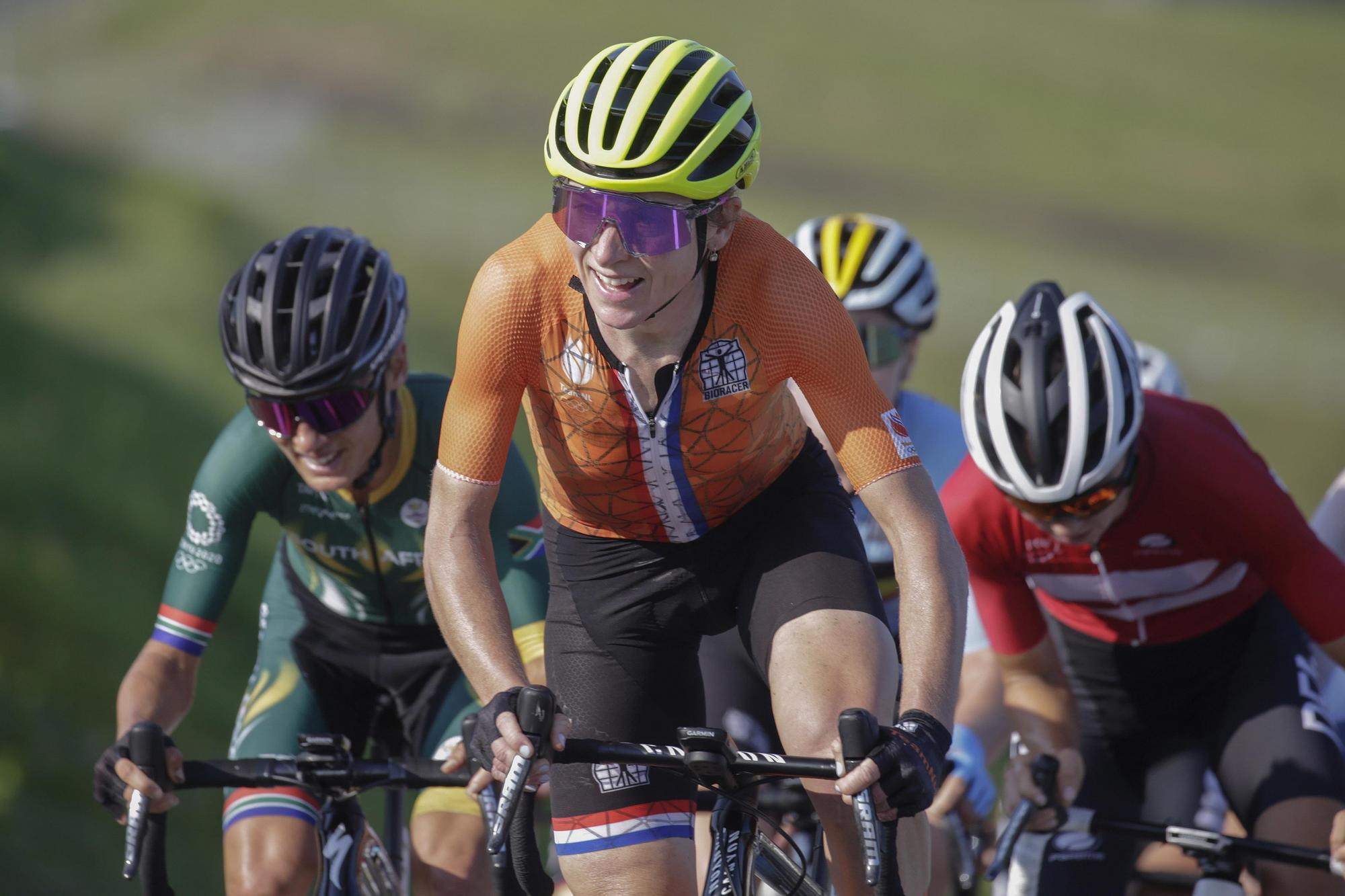 The odds on the Dutch team are also confirmed in the time trial, where the athlete to beat will be Ellen Van Djik, European Champion from 2016 to 2019. Switzerland’s Marlen Reusser will aim for the title too, with German Lisa Brennauer, French Juliette Labous, Danish Emma Norsgaard and Italian Vittoria Bussi also holding good chances. Tokyo’s Road Race gold medallist, Austrian Anna Kiesenhofer, will also compete in the time trial.

Trento will also offer the chance to discover many emerging talents engaged in the youth categories. Among the most awaited Under 23, there are twins Tobias and Anders Halland Johannessen, top protagonists in the recent Tour de l’Avenir, as well Spaniard Juan Ayuso. Dutchman Marjin Van der Berg and Frenchman Valentin Paret-Peintre.

Confirming the trend towards the multi-discipline, many riders at the start in Trento are committed at a high level also in cyclocross and mountain biking, such as Swiss Alexandre Balmer and Nils Aebersold, Belgian talent Thibau Nys, son of the great Sven, as well as Austrians Laura Strigger, already Junior World Champion on the road in 2017 and in MTB in 2017 and 2018 and Mona Mitterwallner, fresh gold medallist in the U23 Cross Country race at the recent UCI MTB World Championships in Val di Sole.

SEVENTEEN HOURS OF LIVE COVERAGE ALL OVER THE WORLD

The European Championships in Trentino will be a pleasure to watch for the fans on the spot, as well as the TV viewers from all over Europe and beyond, thanks to the Eurovision’s production with advanced technologies.

With TV coverage in 71 Countries, the 2021 European Championships have already beaten the record of the previous edition, looking to exceed the 2020’s 13 million viewers.

10 DAYS OF SIDE EVENTS

Not only cycling races: Trento will breathe the European Championships atmosphere with meetings, exhibitions and side events dedicated to cycling and bike. The programme starts on Friday, September 3rd, to finish on Sunday, September 12th for a 10-days full immersion of cycling, sports culture and discovery of Trento and Trentino.

The scavenger hunt “The Adventure of Trient” will be available to discover the city from Frida, whilst on Saturday, September 4th open-air cinema and music will take place in Piazza Duomo, whilst a photo exhibition dedicated to cycling history also to be inaugurated in Cesare Battisti square.

On Wednesday, September 8th, the MUSE – Science Museum in Trento will make an event night-opening, whilst the documentary dedicated to Francesco Moser will be showed on for Thursday, September 9th. Friday, September 10th is the day of the night dedicated to road safety, organized by Michele Scarponi Foundation in Trento’s Palazzo Geremia.

The main event of Saturday, September 11th is the European Night organized by the Municipality of Trento. The program features music and circus shows. On Sunday, September 12th, the “Trento by Bike” free ride organized by FIAB (Italian Environment and Bike Association), will close the program. 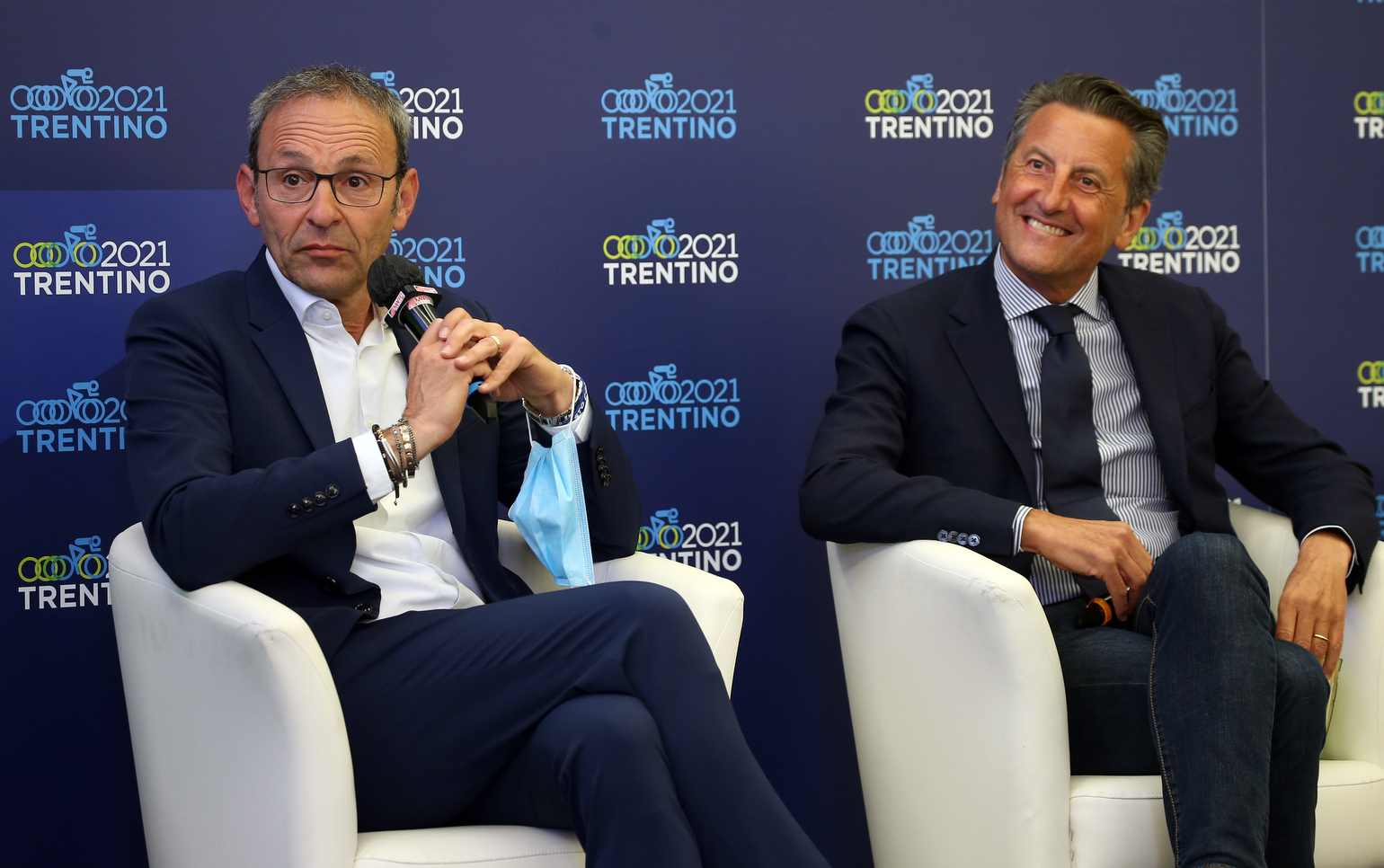 The European Championships in Trentino represents a major opportunity also for brands, partnering with the OC made by the Trento, Monte Bondone, Valle dei Laghi Tourism Board in collaboration with Trentino Marketing, the Municipality of Trento and Trento Sports Events.

Among the Premium Sponsors and Golden Sponsors, the European Champs can count on major local companies like ITAS Mutua Assicurazioni, Coop Trentino, Gruppo Cassa Centrale, and Dolomiti Energia and Melinda. International brands like Umana Medical and Suzuki have also seized the opportunity of partnering with a major cycling events, joining a panel that also features UEC’s technical partners, Vittoria and Alé.

AN EVENT IN FULL SYNERGY WITH THE TERRITORY

Like all major events, European Champs in Trentino will change the routine of the Trento residents and workers for a few days. For this reason, the Organizing Committee has worked and collaborated with the Municipality of Trento and the trade associations, listening to the needs of all to implement a detailled plan of action, information and communication.

A task force of 200 people will guarantee a fully safe event. In addition, a special green line will be activated for all the information related to services.

The information campaign, on newspapers, web, radio and social media, is meant to bring awareness of the event to the whole citizenship, spreading news on the organizational provisions and the opportunities of the event.

As usual, law enforcement forces and volunteers will play a key role in guaranteeing safety to an event whose organizational squad counts on about 200 people. A group of 160 people will take care of road safety, in addition to 40 volunteers including students from the Trento high schools.

The Municipal and Traffic Polices will also provide their support to the event, their fleets joining the 19 moto relays of the organization. 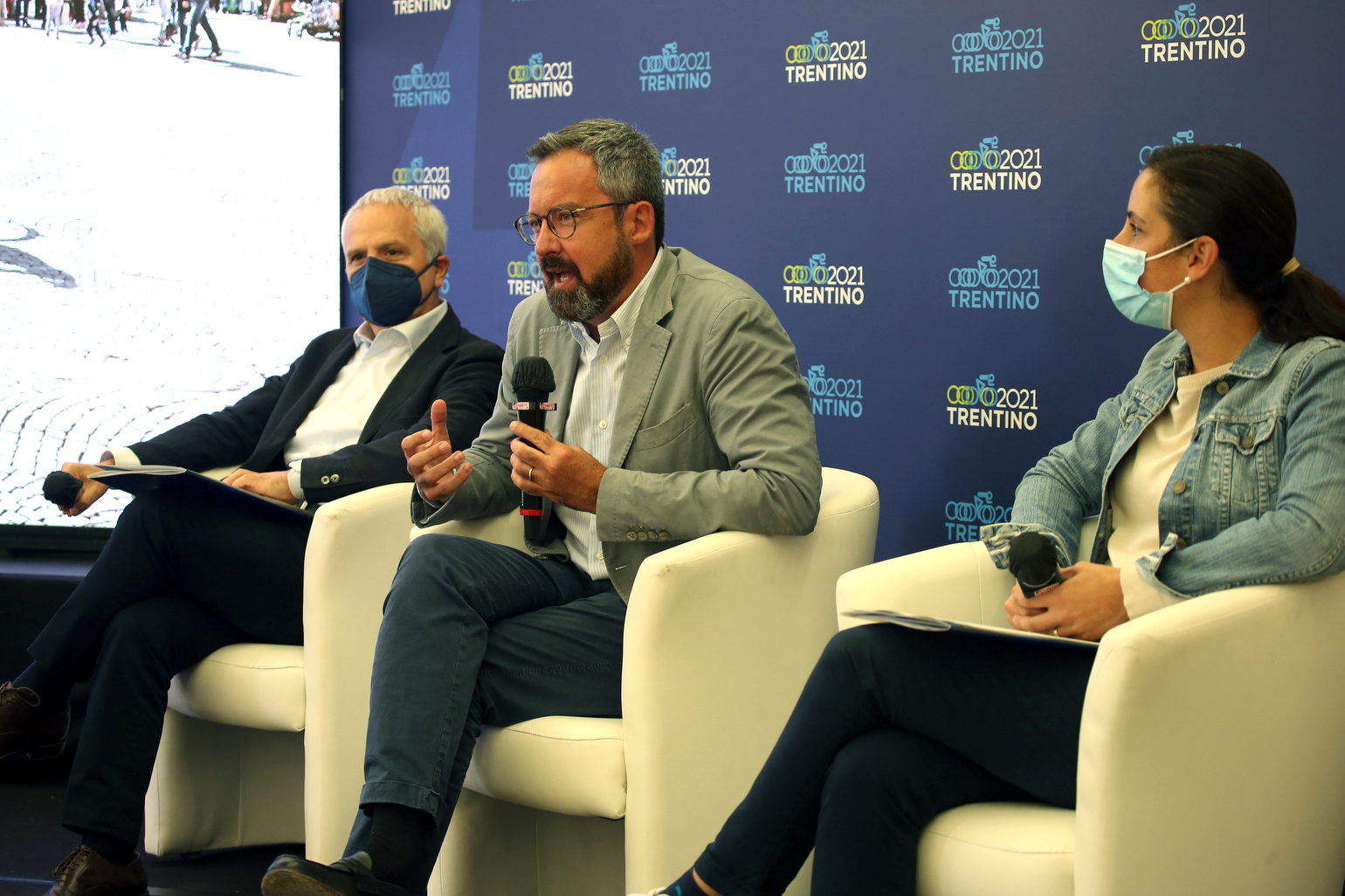 THE EUROPEAN CHAMPS FOCUS ON SUSTAINABILITY

The European Champs in Trentino give special attention to environment and sustainability, with plenty of initiatives: from the use of certified clean energy thanks to the partners of Dolomiti Energia, to the waste differentiation, the use of biodegradable dishes and the choice to utilize the eco-certified paper to print the Event Guide.

The three food areas organized by the local committee will utilize biodegradable dishes, cutlery in bioplastic and plates made from biodegradable cellulose, whilst the glasses will be replaced by the bottled water in recyclable plastic.

The waste differentiation will be organized in collaboration with Dolomiti Ambiente setting up collection points characterized by three garbage cans. Organic waste and glass will be differentiated by the catering service.

On the the races’ routes, the Organizing Committee set up the so-called “green zones”, as provided for the technical regulation of the International Cycling Union, where the riders can release their waste to be collected by the cleaning staff of the event and properly differentiated. 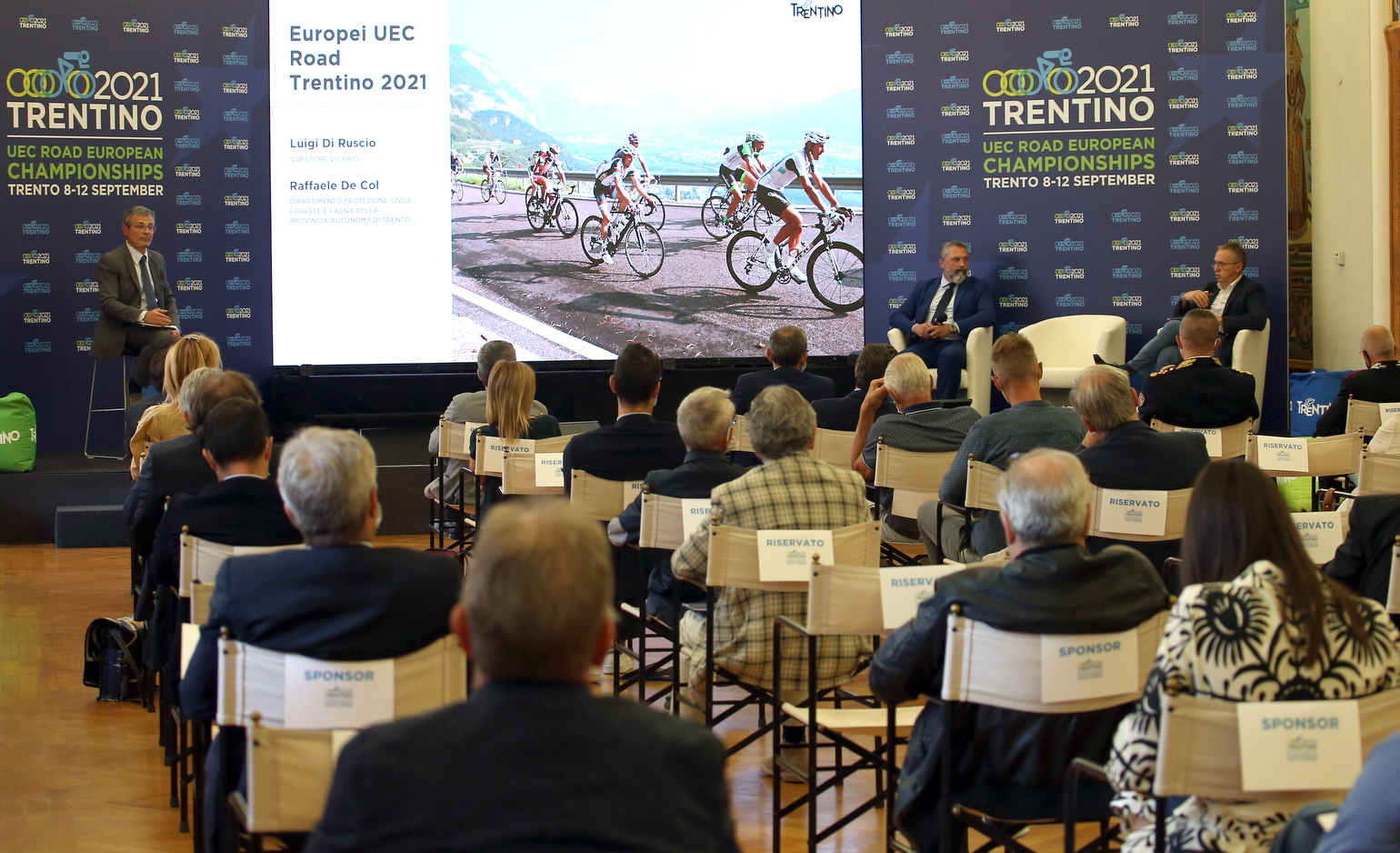