Trento turns on the engine with the "Steel Horse" exhibition

The start of the European Road Cycling Championships (8-12 September) is now approaching, and the city of Trento is warming up with the first collateral events. On Saturday September 4th, the “Steel Horse. Stories from Cycling in Trentino” exhibition was opened in Piazza Cesare Battisti and it will be available until September 12th 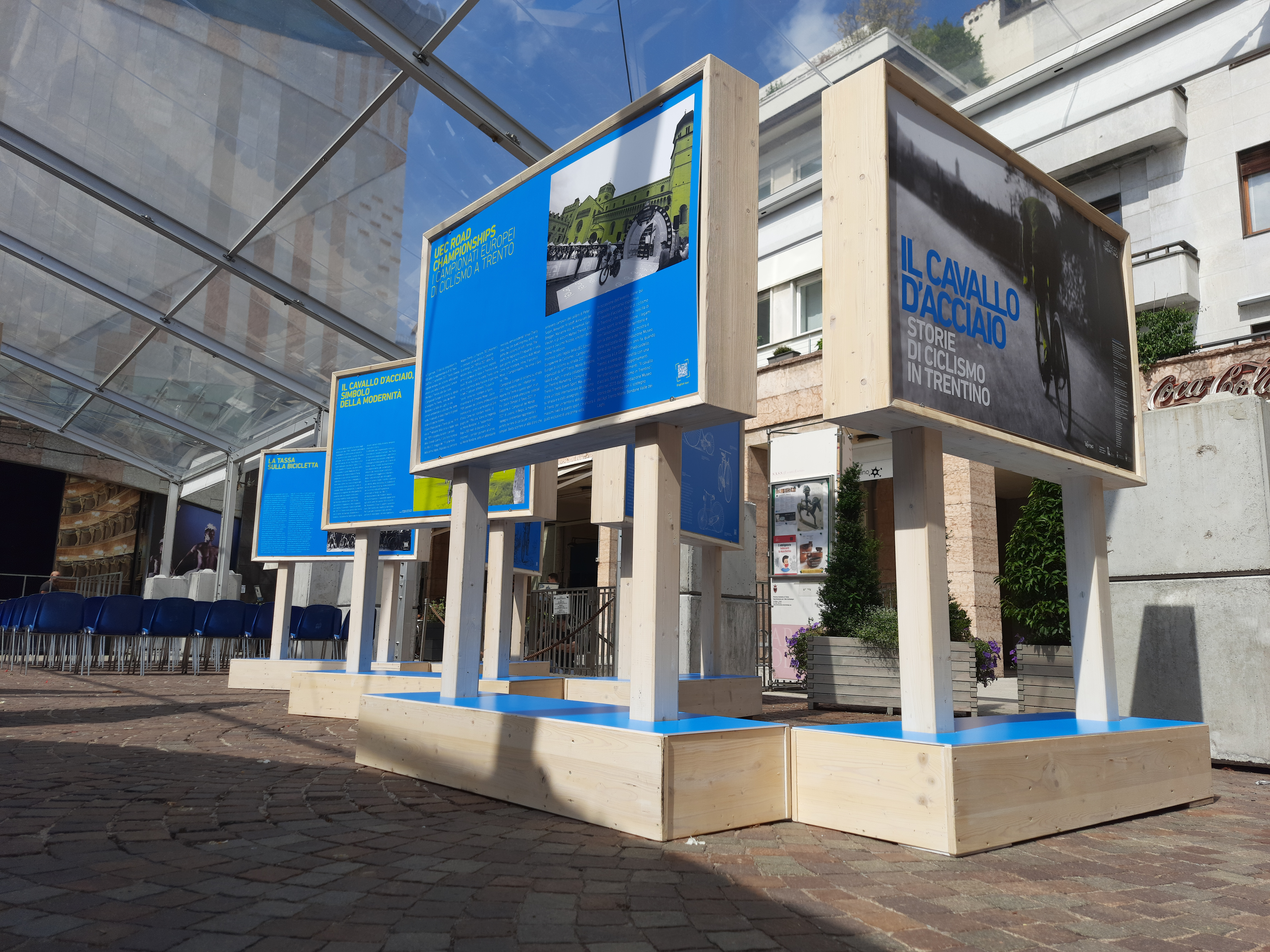 The great champions are heading towards Trento: it’s a matter of days, before the European Road Cycling Championships – Trentino 2021 (8-12 September 2021) officially start. With the inauguration of the “Steel Horse. Stories from Cycling in Trentino” exhibition, and the early collateral events of a stacked panel, the City has started breathing the atmosphere of the European Championships.

The exhibition dedicated to the history of cycling and its diffusion in the Trentino territory was opened on Saturday, September 4th in Piazza Cesare Battisti in Trento, giving a symbolic start to the continental event. The exhibition, patronised by the Organizing Committee of the European Championships led by the Trento, Monte Bondone and Valle di Laghi DMO in close synergy with Trentino Marketing, the Municipality of Trento and Trento Eventi Sport, will be available free of charge until Sunday, September 12th.

Created and organized by the Fondazione Museo Storico del Trentino, the exhibition is a reinterpretation and update of a previous one held at Le Gallerie (Piedicastello, Trento) a few years ago. “Starting from the history of the bicycle and cycling in general, we have created a journey through the history of the Trentino area to underline how sport can be an extraordinary vehicle of ideas, and the history of the sport itself a very charming story – explains Alessandro De Bertolini, curator of the exhibition -. Here you can find stories of Trentino’s past, such as when the first cycling sports associations in the early 1900s met for trips and pedaled in the nearby Italian territories for irredentist purposes”.

On the evening of Saturday 4th September, the Municipality of Trento also organized the “Waiting for the European Championships” event, with the projection in Piazza Duomo from 9 pm of the cartoon “Mila” by director Cinzia Angelini, with live music by the Haydn Orchestra of Bolzano and Trento. “Mila” is intended to represent all the children of every war and every era in dramatic days when the whole world is watching the images of the Afghan people’s tragedy.

From Friday, September 3rd, it is possible to have fun with “Trent’s adventure“, a treasure hunt through the streets of the city to discover the treasures and secrets of Trento. Starting from Tuesday, September 7th, other events of the panel will involve citizens and guests with talks, movies, concerts, and cultural moments, to make the European Road Cycling Championships – Trentino 2021 a great event for everyone, even beyond sports.

From September 8th to 12th, it will be time for the champions to ignite the show on the roads of Trento, Monte Bondone and Valle dei Laghi. Trento will live days of great celebration as the European capital of cycling, hosting top names such as Tadej Pogacar, Peter Sagan, Remco Evenepoel, Filippo Ganna, Annemiek Van Vleuten, Marianne Vos and Anna van der Breggen. A worldwide show intended to display a wonderful postcard of Trentino.