Italy celebrates in the final act of an intense day at the UEC Road European Championships Trentino 2021. Romain Gregoire of France and Germany’s Linda Riedmann graduate new champions among Juniors

On the third day, the European Championships – Trentino 2021 has reached the heart of Trento: the geographical one, Piazza Duomo, and the one of the people, who responded with even greater enthusiasm than the beautiful two days at Le Albere district. The Road Races have started on Friday September 10th, meeting their scenic starting and finishing point right in front of the Trento’s Dome.

The third day of Trentino 2021 offered three entertaining and exciting challenges among Junior Men and Women, and Under 23 Women. The clincher of the day was Silvia Zanardi’s winning three-rider sprint that made the Italian fans voice their excitement. It was the third gold for the home Country in the first three days of the event.

Before Zanardi, French Romain Gregoire and German Linda Riedmann had celebrated their road race titles in the junior categories, treating themselves to a pour of Trento DOC – the only rains of this splendid week of sunshine in the Trentino sky. 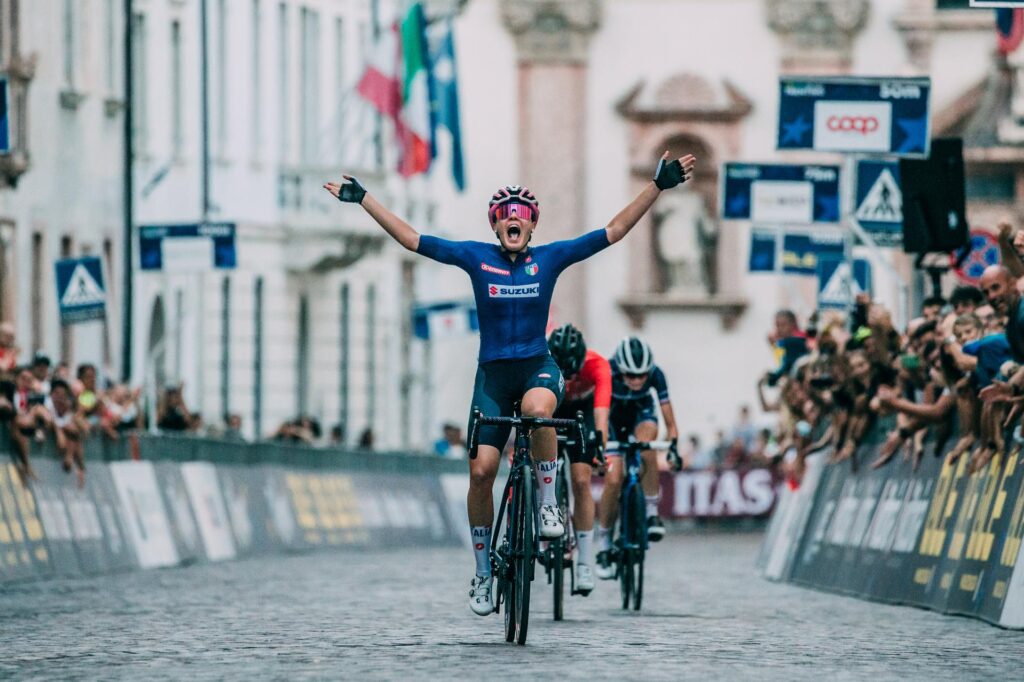 FROM THE TRACK TO ROAD, ZANARDI KEEPS RAKING TITLES

The first day of road races helped shaping a fairly precise identikit of the qualities required to conquer the European gold on the Trentino course: brilliance and punch uphill, a good dose of tactical acumen and a more than solid sprint. Silvia Zanardi had them all today in the Under 23 Women’s race.

Fresh from the three European Under 23 titles won on the track in Apeldoorn, the Italian from Fiorenzuola d’Arda gave herself a new star-studded jersey thanks to an intelligent race conduct in the six laps of the Trento circuit (80.8 km).

It was an elimination race for long, with Italy, Germany, the Netherlands and Belgium pushing hard at the front, preventing breakaways while dropping riders from behind.

After a solitary attempt by the French Le Net on the penultimate lap, the race was decided on the last lap with the attack of Italian Gaia Realini on the Povo climb. Only four riders could follow in Kata Blanka Vas (Hungary), Silvia Zanardi, Evita Muzic (France) and Laura Stigger (Austria). Then, when the Hungarian decided to push through, also Realini and Stigger got dropped.

The trio at the front eventually contested the title in a three-way sprint, confidently won by Zanardi over Vas and Muzic. “In the final kilometers I kept asking for info on the gap, when I heard 20 seconds I realized it could be done. I owe a lot to team tactics today: Realini would go on the attack on the tough stretches, and I should have sat up in the group, trying to hold on as long as possible. When Gaia faded a bit at the top, I managed to hold on with Vas: it was my chance, and I took it.” 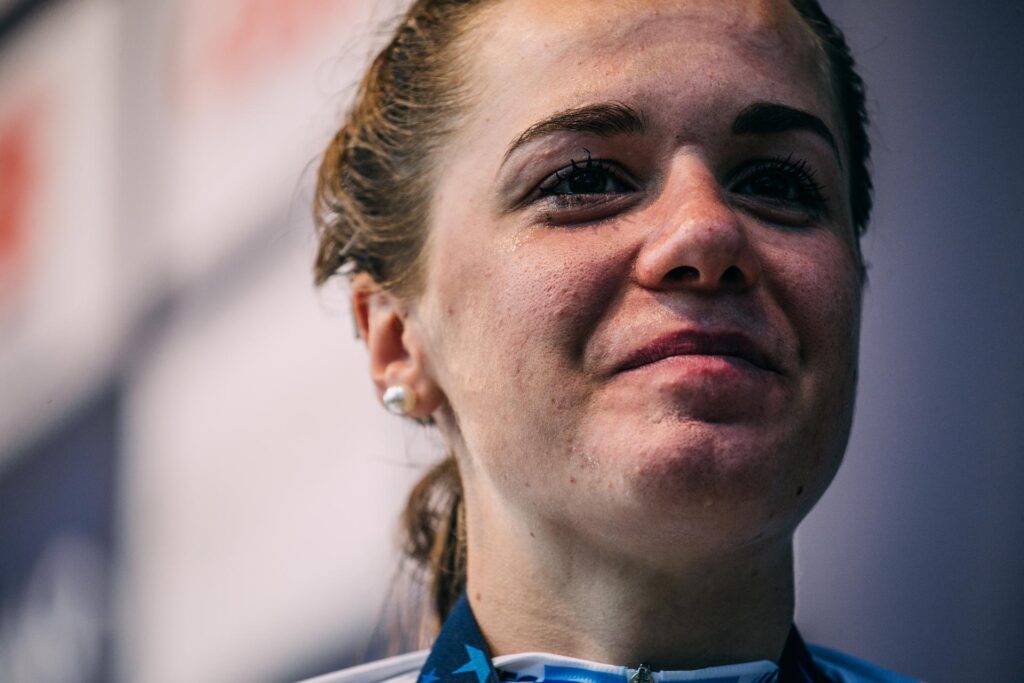 JUNIOR MEN, GREGOIRE IS THE GOLD OF FRANCE

In the Trento’s morning, France dominated the Men’s Junior road race, winning both gold and bronze. The new champion is Romain Gregoire, who beat Norwegian Per Strand Hagenes and compatriot Lenny Martinez in the three-man sprint.

After a quick early part of the race, with attempts by Irish Rafferty and the German Abt and a first move by Gregoire himself at km 85, the turning point of the race came at the start of the last of the eight laps (107.2 km), when the trio made by Gregoire, Hagenes and Martinez gained about ten seconds on the peloton, which was no longer able to close the gap. At the sprint, the French duo managed to exploit their strength in numbers, leaving no escape to the Norwegian.

“It’s fantastic, this was my big goal of the season and I managed to hit it,” said Gregoire. “I came on recognition on the route in June, we knew what to do, but until the last lap we weren’t able to make the difference we wanted. In the final I was afraid of Hagenes, who is very fast: fortunately, he did not make the last corner in the best possible way, and this also helped me to beat him.” 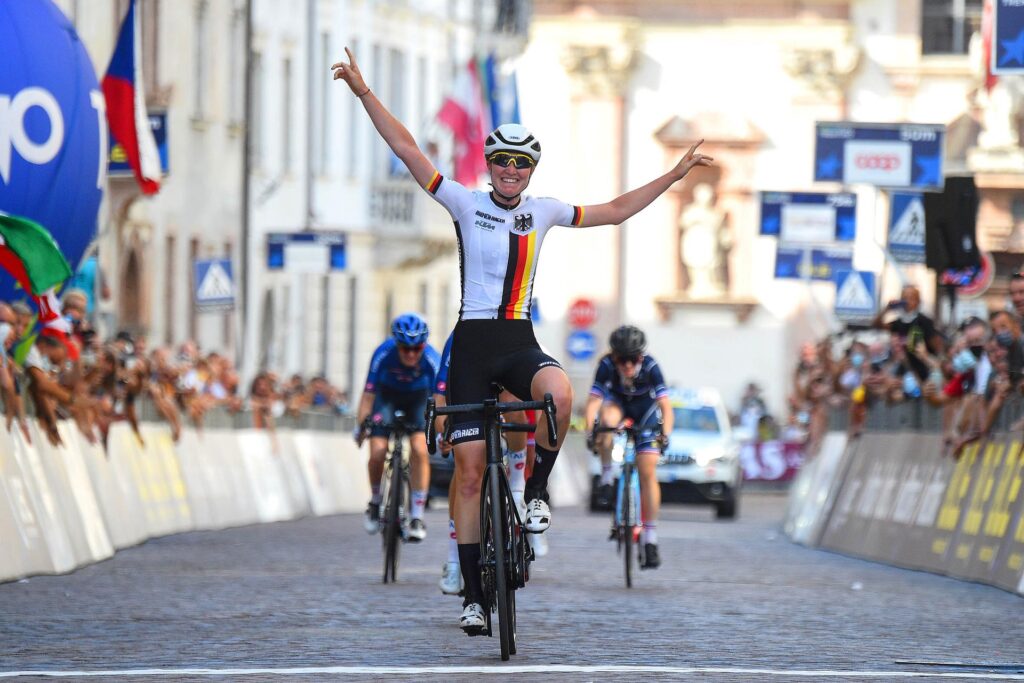 In the early afternoon, Italy had come close to another success in the Junior Women test, in which Eleonora Ciabocco had to settle for second place behind Linda Riedmann, winner of another reduced sprint – this time of five athletes. Rounding out the podium was French Eglantine Rayer.

On the 67.6 km of the Trento circuit (5 laps), the race was decided by the escape of six athletes who, in addition to the three girls on the podium, featured winner of the Junior Women Time Trial Alena Ivanchenko, fellow Italian Francesca Barale and Russian Inna Abaidullina.

During the last time on the Povo climb, Riedmann tried to get clear of her opponents, but managed to distance only Abaidullina. In the final kilometers, Barale’s work for Ciabocco was not enough to beat the German, who won in 1:53:09.“I knew I could have a chance today, but the race was really tough, with this climb wearing the legs lap after lap. On the final ascent to Povo I tried to accelerate, but the descent wasn’t that technical so I was caught, and it ended up in a sprint. Now I will enjoy this success before focusing on the World Championships,” the German winner told.

On Saturday, September 10th, it will be time for the Elite Women’s road race, getting off at 14:15 CET from Piazza Duomo in Trento. The Netherlands are widely regarded as the team to beat on the 107.2 km course (8 laps of the 13.2 km circuit), lining up with outgoing champion Annemieck Van Vleuten, as well as Marianne Vos, Amy Pieters, Demi Vollering and Chantal Van den Broek-Blaak. Italy will play its cards by opposing Team Relay Elisa Longo Borghini and Marta Cavalli, plus a mix of youth and experience. Among the other top names, Lotte Kopecky (Belgium), Audrey Cordon Ragot (France), Lisa Brennauer (Germany) and Katarzyna Niewiadoma (Poland) should not be underestimated as well.

Starting the morning will be the Men’s Under 23 Road Race (starting at 9:00 CET). The young talents of European cycling will compete on a 133.6 km course, repeating 10 times the city circuit including the Povo ascent (3.6 km at 4.7%). There are many interesting names to follow, including Juan Ayuso, the promising Spaniard winner of the U23 Giro d’Italia, and Norwegian twins Anders (winner of the Tour de l’Avenir) and Tobias Halland Johannessen. Belgian Henri Vandernabeele should not be overlooked as well, while Italy will try to play its best cards in Filippo Zana and Luca Colnaghi. 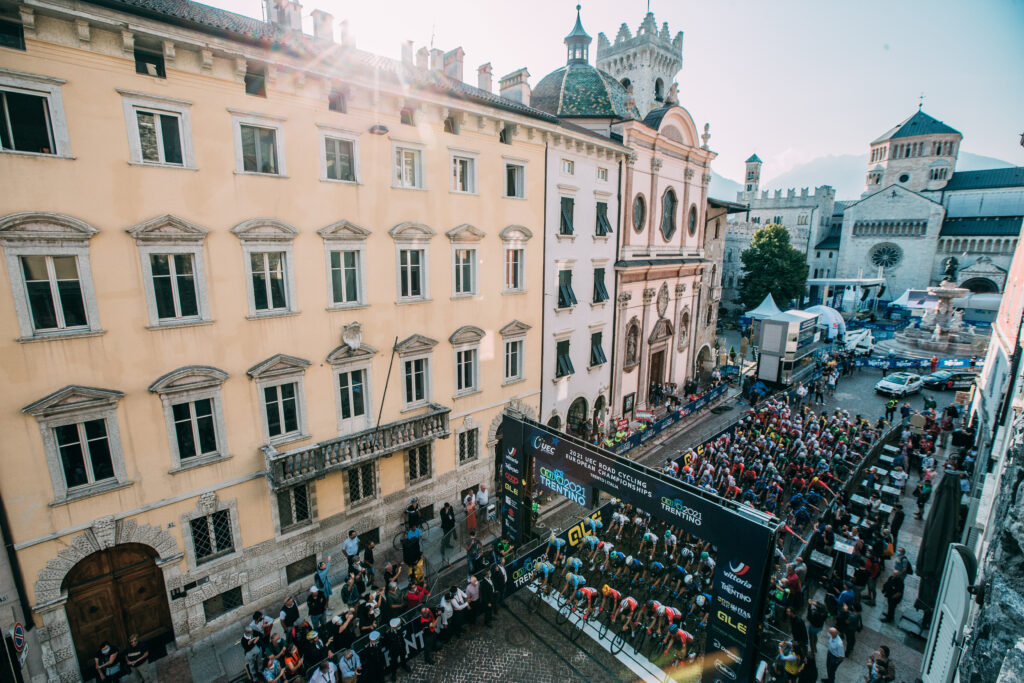